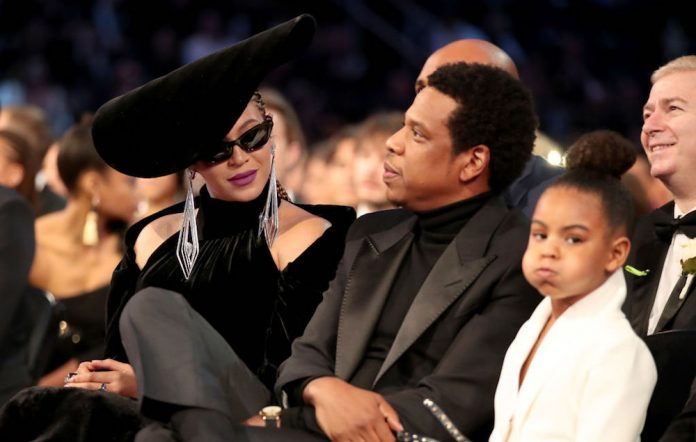 A video of Beyoncé and Jay-Z‘s daughter Blue Ivy grimacing at NSFW footage featuring her parents has gone viral online.

The couple are currently embarking on the European leg of ‘On The Run II’ joint tour, recently playing UK dates in Cardiff, Manchester and London.

In between songs during recent shows, the pair have been airing various home videos, showing the couple at home with family and, on occasion, in very intimate settings. One clip depicts Bey and Jay naked in bed.

Footage has emerged of Blue Ivy watching her parents at one of their concerts, and her reaction to the more racy footage being shown. It shows the 6-year-old cringing and trying to avert her eyes. See that below.

Meanwhile, Beyonce and Jay-Z are selling a tour book that features NSFW photos. On sale at all shows across their tour is the souvenir programme booklet, which features intimate photos of the couple in bed, at rest and at the beach.

Beyonce and Jay-Z released a joint album called ‘Everything Is Love’ under the name of The Carters. Read the NME review here.

Reviewing their tour, NME wrote: “And as the night nears its close, the doubters are definitively silenced with a surprisingly moving clip that sees the pair renewing their vows.”

“All considered, it’s a total triumph – and the perfect indication that things will only get bigger and better as the world tour of juggernaut proportions goes on.”