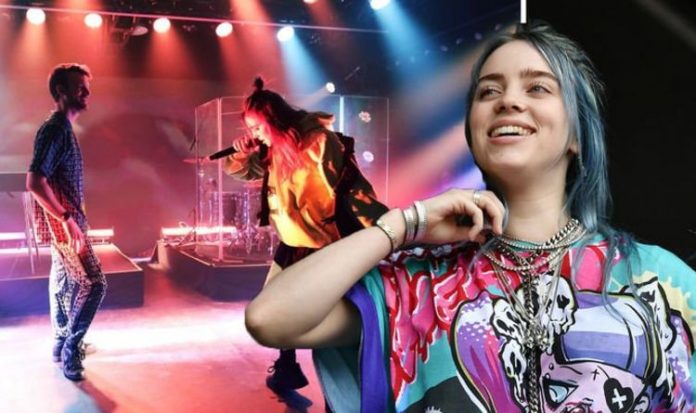 Billie Eilish has written songs in her career which have spoken to a generation. She broke records with her Grammy Award wins, with one of her songs being crowned Song of the Year. Despite her incredible songwriting prowess, she does not write alone – but who does she write with?

Billie Eilish writes her songs with her brother Finneas O’Connell.

Finneas is an artist in his own right and has also worked with artists other than Billie, such as Selena Gomez and Camila Cabello.

Despite this, their songwriting partnership is legendary, and they have worked together for many years.

But they have not always worked together when they started out learning to write songs while being homeschooled by their mother, actress and musician Maggie Baird.

Speaking to Variety in 2019, Billie said: “The first songs that we worked on, we didn’t write together.

“He wrote this song called ‘She’s Broken’ and I wrote one called ‘Fingers Crossed,’ and we recorded them and put them out on SoundCloud, just for fun.”

While Maggie may have been encouraging them, she does not credit herself with writing the songs and instead has suggested another incredible band helped Billie to learn her craft.

Maggie said, in the same interview: “I always say it was actually The Beatles who taught them to write songs.

“Because the class was for kids, I had to simplify it: ‘Here’s “I Want to Hold Your Hand,” let’s give these pieces of the song a name.’

“The class was just an hour a week for 10 weeks or so — but Finneas was like [mimes ‘Eureka!’ moment], and in a few months he formed a band.

“All I had to teach him was the basics, and he immediately got it — and the same with Billie.”

While Maggie may not take very much credit, Billie has said her “really musical family” is what helped her to start out.

Speaking to Clash magazine, she said: “We’ve always been a really musical family, in sort of a gross way.

But the siblings’ first collaboration was on Ocean Eyes, the 2015 song which took SoundCloud by storm, though this was written purely by Finneas.

Speaking to Paper magazine, she said: “My brother came to me with Ocean Eyes, and it was weird because it was exactly what I was thinking.

“It was like he jumped into my head, wrote something and came out and gave it to me. I loved it.”

While this may not have been the first song they wrote together, this was the first song which fans became acquainted with, and how they got their start in the music business.

Billie added to Clash: “He is really like my partner in making music. We give and take so well.

“There’s so much time wasted, working with people you don’t know, where if you don’t like something, you’re like: ‘You could, maybe, I don’t know, maybe try something where it’s a little different.’

“Whereas, with Finneas it’s just like, ‘No, that sucks, let’s move on.’ We just know each other so we can do that.”

They have both written all of the songs on Billie’s first album, as well as the first two songs she has released in 2020, which some have expected to form part of her upcoming album, though she has remained tight-lipped on that subject.