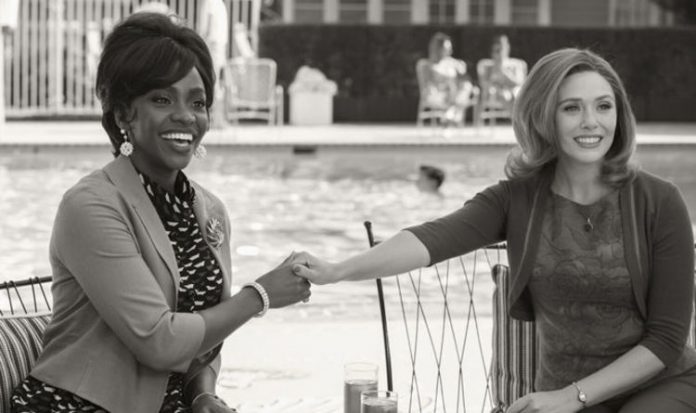 Avengers Endgame confirmed the fate of Vision (Paul Bettany) after he was obliterated by Thanos (Josh Brolin) for the Mind Stone in his forehead. Despite his brutal death, he has since inexplicably returned in the Disney Plus show WandaVision. While his presence has confused fans, one of the stars of the show, Teyonah Parris, has now revealed exactly when it takes place during the massive Marvel cinematic universe, and it looks like it is bad news for the robotic hero.

Speaking on the release of the first official MCU TV show, Parris revealed: “(WandaVision) picks up right after the events of (Avengers) Endgame.”

The first two episodes of the TV show delved into Wanda and Vision’s relationship in a 1950s sitcom style.

However, as we now have confirmation that WandaVision takes place after Avengers Endgame, this confirms that Vision is in fact dead.

Therefore, it is extremely likely that Wanda is somehow projecting her version of Vision into existence after becoming frantic with grief following his death.

It has since been theorised that Wanda’s pain and suffering will see her produce a reverse House of M situation in the show.

In the comic books the House of M arc Wanda eradicated all of the mutants – but if the theories about WandaVision are correct, she will instead create them.

Considering Disney has recently bought up Fox – who owned the movie rights to the X-Men – it is also presumed this is how the X-Men are going to be introduced into the MCU.

The X-Men were last seen in X-Men: Apocalypse, concluding the timeline headed up by Michael Fassbender as Magneto, and James McEvoy as Professor Xavier.

Parris added fans will find out “what’s been happening with her over those years that we missed, how she’s grown and evolved.”

In the first two episodes she introduces herself as Geraldine, however she seems extremely confused as to her whereabouts.

Monica was first seen in Captain Marvel, but as the movie was set in the 1990s, the character was just a child at the time

Not a lot is known about Monica’s involvement in the new series, but she is sure to become one of the bigger heroes in the mythos.

In the comic books Monica Rambeau is a god-like hero who possesses powers that rival those of Captain Marvel herself.

As an agent of S.W.O.R.D. (Sentient World Observation and Response Department), she tackles any other-worldly threats that may arrive on Earth.

She later became the leader of the Avengers, following the abdication of Wasp.