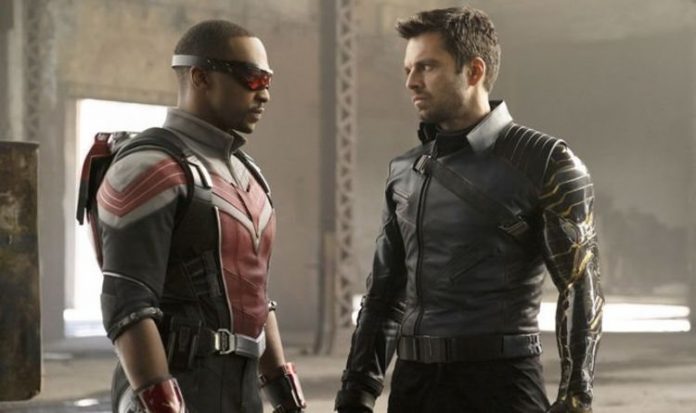 This year the Marvel Cinematic Universe has dominated the small screen, with WandaVision taking hold of Disney Plus. In just a few weeks the next Avengers-focussed TV show will begin, Falcon and the Winter Soldier, and the legacy of Captain America will continue. In the final moments of Avengers Endgame Cap gave his shield to Falcon (Anthony Mackie), passing on the mantle of the American hero. Earlier this year Mackie explained how the show would reveal the character’s “replacement” – but the recently released trailer showed Falcon struggling to throw the shield as well as his predecessor, while an imposter steps into the picture.

Cap’s best friend, Bucky Barnes (Sebastian Stan), is also a possible candidate to take over from the fallen warrior.

The trailer even alludes to this when the Winter Soldier catches the shield during Falcon’s training.

However the biggest threat to both of them – and the legacy of their friend – is the arrival of US Agent.

In the Marvel comic books, US Agent is the American government’s official replacement for Captain America after his death.

The character is even given the same super soldier serum that granted Steve Rogers his powers.

The US government tampered with the Avengers and their work in Captain America: Civil War, so it would make sense for them to want to place their own hero in the line-up.

Falcon and The Winter Soldier’s trailer shows off a man in a Captain America suit twice – this character may have been US Agent.

Firstly, the hero is shown at an American football game high-fiving a mascot on the field at around 1:09.

Secondly, a fight scene around 1:17 shows a man in costume holding the shield, before another shot shows Falcon throwing the shield is shown.

At first, this looks like this could be Falcon throwing the weapon – but on closer inspection the character’s face is obscured, so it has a good chance of being US Agent.

The struggle between Falcon and the new antagonist will likely be the crux of the TV series.

Falcon and Bucky were given the shield by Captain America, but if the government is keen to take control of the hero themselves, the two parties are going to continue disagreeing.

The antagonist US Agent has previously been confirmed to be in the TV series.

Russell is the son of Kurt Russell and Goldie Hawn, and previously appeared in 22 Jump Street, This Is 40, and The Walking Dead.

Falcon actor Mackie previously spoke up on the next Captain America being revealed throughout his upcoming show.

Speaking in an interview earlier this year, Mackie said: “See, at the end of Endgame, Sam didn’t accept the shield. If you remember, he told Steve [Rogers]: ‘It doesn’t feel right because the shield is yours.’

Speaking on the quality of the upcoming Disney show, the 42-year-old added: “It’s a really good show, I was worried, when I first heard it was streaming, that the quality would be lost. That it would turn into this idea of what these movies could be, and they wouldn’t be able to do the action sequences, and give us the look that we’re accustomed to when it comes to these Marvel movies.

“The action sequences are mind-blowing. The story is great, you really get to know the characters and fall in love with the characters. As you can see with WandaVision. It just brings you further into the universe. So, it’s not going to disappoint. I’m excited for people to see it.”

The Captain America films are available on Disney Plus now.