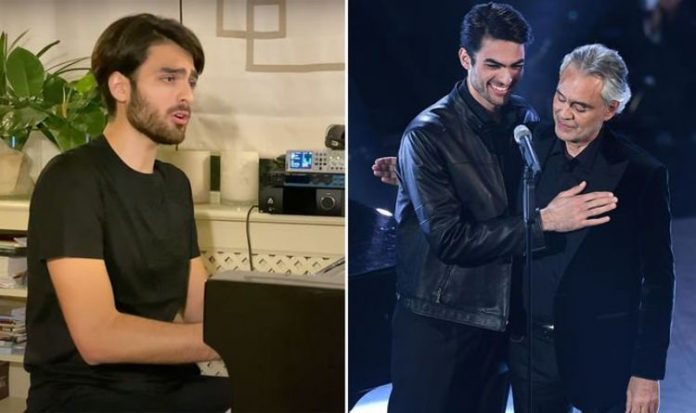 A couple of years ago, Andrea Bocelli discovered that not only did his son Matteo Bocelli want to be a singer but those incredible vocals really do run in the family. The father and son went on to perform their first duet in 2018’s Fall On Me, which has over 83 million views on YouTube. Sung partly in English and partly in Italian, the track is their tribute to each other and featured on Andrea’s studio album Sì; while Fall On Me ended up being played in the end credits of Disney movie The Nutcracker and The Four Realms.

And now during lockdown at home in Tuscany, Italy last May, Matteo recorded a solo version of Fall On Me while playing the piano.

The performance was filmed for the #ForMilanWithLove event, a global tribute to key health workers in Italy and beyond, powered by AC Milan and Roc Nation.

Before his mini-concert, Matteo says: “Hi everyone, it’s a pleasure to be with you.

“My thanks to all the doctors who are helping and supporting us against COVID-19 and now I’d like to sing a song for you and I hope you’re going to enjoy it.”

Now almost a year later and Matteo Bocelli is preparing to release his debut solo album.

The 23-year-old’s first solo single came last year in a cover of Elton John’s Can You Feel The Love Tonight from The Lion King.

The track, which was accompanied by The Royal Philharmonic Orchestra, features on the 2020 album Disney Goes Classical.

But in terms of his own original music, Matteo has teased fans with what he has planned for his very own record in 2021.

Dressed in black tie, Andrea began playing a grand piano while singing his heart out for an extract of O Sole Mio.

After this incredible performance, the 62-year-old tenor was joined by Matteo who greeted the Chinese audience by saying Ni hao, which translates as Hello in their native tongue.

Surrounded by beautiful Chinese New Year decorations for the Year of the Ox, Matteo took over the piano playing from his father.

The 23-year-old then began singing a beautiful rendition of Fall On Me with Andrea.

Express.co.uk caught up with Andrea last year when he was promoting his new album Believe.

Asked if Matteo joins in singing when at home, the tenor said at the time: “It happens a lot, yes. Matteo hasn’t been with us lately, as he has spent a few weeks working in Australia. He is just back and we’re definitely planning to make up for lost time.”

While on the possibility of a family album now that his daughter Virginia Bocelli has performed live with him too, Andrea replied: “It’s not a consideration at the moment. But… never say never.”