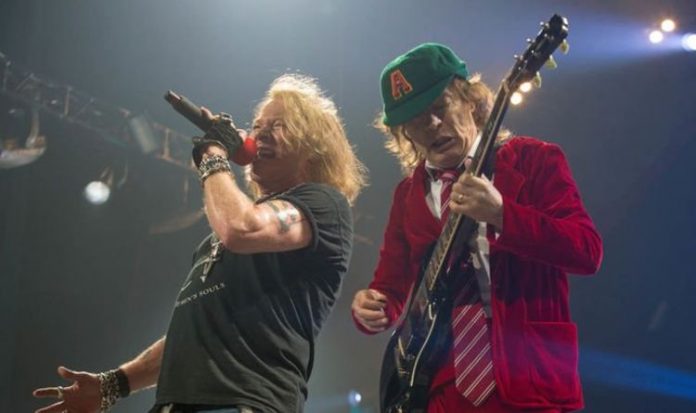 It’s dedicated to the band’s co-founder, rhythm guitarist Malcolm Young, whose tragic 2017 death from dementia was just one in a series of setbacks that would have sunk a lesser combo. Geordie singer Brian Johnson quit to save his hearing, drummer Phil Rudd was busted for drugs and placed in home detention, and bassist Cliff Williams retired. But all three are back for Power Up.

The new single, Shot In The Dark, sets the tone perfectly for AC/DC’s first album since 2014’s Rock Or Bust, powering in with a glorious riff and undisguised glee.

Other hellishly good tracks include the upbeat and infectious Demon Fire, with a wiry riff that grips like razor wire, and the opener, Realize, which sets the scene for the mayhem to come. It’s AC/DC doing what they do best.

All the songs are credited to Malcolm and Angus Young, the Glasgow-born brothers who formed the band in Sydney in 1973 and drove it to the heights of stadium rock success.

While cynics sneered, AC/DC stuck to their mix of granite-hard riffing, pounding rhythms and risqué lyrics, influencing Ice Cube, Beastie Boys, and The Sugarhill Gang along the way. They stormed into the Rock & Roll Hall Of Fame in 2003.

AC/DC are not ones for experimentation. As Malcolm once said, “The Beatles and Stones started as rock ‘n’ roll bands, branched out and then went back to rock? so why leave in the first place?

“Why not simply work better and harder at what you’ve got?”

André Rieu Jolly Holiday Violin virtuoso André and his Johann Strauss orchestra were recorded live in his hometown of Maastricht last Christmas. And the 19 tracks here include hymns, waltzes and festive favourites, capturing the uplifting, communal atmosphere of his shows.

The Dutch maestro calls it “a beautiful journey to a Winter Wonderland”.

The Cranberries No Need To Argue This re-release of the Irish band’s 1994 second album comes with unheard songs, B-sides and remixes, while all 13 of the original tracks have been remastered. Highlights are Zombie, Twenty One, Dreaming My Dreams and their cover of The Carpenters’ Close To You.

Dolores O’Riordan, RIP, never sounded dreamier than on this wistful and atmospheric album.

Johnny Cash And The Royal Philharmonic Orchestra Twelve classic songs by the late country star, including Ring Of Fire and Man In Black, are “re-imagined” by the Royal Philharmonic, which takes Cash’s original masters and adds symphonic arrangements.