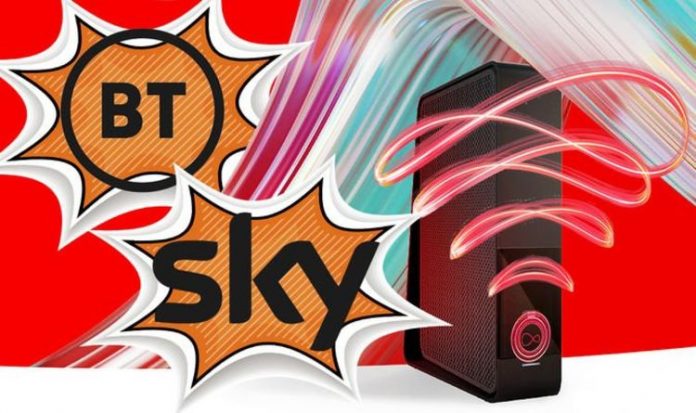 A flurry of new full-fibre broadband firms have launched in recent months – promising big speed upgrades at aggressive prices. For more-established competitors, like BT, Virgin Media, Sky and Plusnet, it can be tough to match these lithe newbies. But for those hoping to upgrade their speeds or looking to cut their bills who aren’t being catered to by the behemoths that operate nationwide, these new options can be extremely appealing.

As companies across the UK scramble to try to upgrade the broadband infrastructure, which is one of the worst in Europe – not to mention globally, here are three new-kids-on-the-block that are either expanding rapidly or launching in the coming months. If you’re one of the millions struggling to work from home, study remotely, catch-up with friends and family with a video call, or binge the latest boxset everybody is talking about on Netflix without suffering through an interminable buffering animation… it might be worth looking at some of the new competition.

First up, Community Fibre already has pretty good brand recognition in the capital, with its service vehicles regularly spotted across the roads. The company recently announced that it has doubled the number of premises covered by its network within the last year – now reaching 200,000 homes across London. As well as expanding its infrastructure, Community Fibre has increased the number of customers on its books by 130 percent in the same period.

It’s not all that surprising to see Community Fibre thriving. As more of us spend more time at home, it’s almost-unrivalled 3Gbps broadband option should guarantee you never have to wait for anything to load ever again. For comparison, the current average speed for household broadband in the UK is some 65Mbps. Community Fibre’s top-speed, which equates to 3,000Mbps, is 4,500 percent faster.

To put that eye-watering amount of speed into context, Netflix only requires 25Mbps to stream its shows and movies in the highest quality on offer. Of course, in busy households, it only takes a few people to stream shows at the same time – or try to back-up their smartphone, download a new update, receive a video call, or update their computer at the same time to quickly top-out a 65Mbps connection and be stuck with the annoying st-st-stuttering. As emerging technologies, such as Augmented Reality (AR), Virtual Reality (VR) and 8K video streams become more commonplace, a full-fibre connection will likely more from a luxury to a necessity.

Community Fibre might’ve hit a new milestone, but the company is far from done. It has previously announced ambitions to reach 1 million promises (mostly in London, but not all) with gigabit-capable full-fibre connections by the end of 2023. This will see the firm expand in parts of Barnet, Brent, Camden, City of London, Croydon, Ealing, Hackney, Hammersmith and Fulham, Islington, Lambeth, Lewisham, Newham, Richmond upon Thames, Southwark, Sutton, Tower Hamlets, Waltham Forest, Wandsworth and Westminster.

Community Fibre charges £25 a month for a 300Mbps connection, £35 a month for 800Mbps, £49 a month for 1Gbps and an eye-watering £99 a month for the future-proofed 3Gbps. Although, to be honest, most people will be perfectly happy with either of the first two subscription tiers.

Another new company looking to connect 1 million premises by the end of 2023 is WeFibre. Unlike Community Fibre, which is centred in London, WeFibre specialises in connecting rural communities. In its most recent announcement, WeFibre confirmed plans to bring full-fibre infrastructure to nine areas in Cumbria and West Wales. Rural communities haven’t always benefited from the same upgrades found in densely-populated areas, like Manchester and London, something that WeFibre, which only launched in October 2020, aims to fix.

The nine new communities highlighted by WeFibre are Llanybydder, Hexham, Keswick, Cwrt-Newydd, Penrhiw-pal, Nantgaredig, New Inn Cross, Llanrhystud, Llanllwni, and Tan-y-groes. These are in addition to the projects in Marsden, West Yorkshire, which will see full-fibre connections go live in 2,200 homes by the end of this year. WeFibre is also committed to connecting 50,000 premises in Tameside, Greater Manchester and 100,000 around Blackpool by the end of 2022.

As well as offering speedy broadband connections, WeFibre also sells mesh network kit to customers, which uses multiple nodes dotted around your house to ensure every nook and cranny is flooded with strong Wi-Fi signal. While a full-fibre cable to the door will solve a lot of your home working woes, if you have a patchy Wi-Fi network at home… unfortunately, you’re not going to see the benefits of the 1Gbps cable under your driveway.

When it launches, WeFibre will offer 1Gbps connections for £20 a month, its website promises.

Finally, Gigaclear has slightly smaller ambitions than the previous two newbies, stating intentions to cover 500,000 UK properties with their full-fibre network by the end of 2023. At present, this full-fibre provider offers up to 1Gbps speeds to some 12,000 homes and businesses in the South West. Until now, Gigaclear has mainly focused on rural areas of Devon and Somerset.

Speaking about its plans, South West General Manager at Gigaclear Jo Scarrott told broadband-centric blog ISPreview, “Our time to build is dropping as we streamline our processes and we have heavily invested in the region, all of which are major contributing factors to our strong outlook. In addition to that, we are continuously innovating and trialling new technologies that allow us to be more effective and efficient in the delivery of our service, plus it means we can reach the most remote communities that have been left alone by other providers. Of course, we are always striving for improvement, but thousands of residents in rural villages and market towns across the South West can now look forward to some of the fastest broadband speeds in the world.”

Like WeFibre, Gigaclear also offers a mesh network with some of its bundles. Unlike a traditional Wi-Fi extender, mesh networks don’t impact the speed of your wireless connection. It also means you don’t have to dive into the settings menu on your smartphone or tablet to deliberately move between the original Wi-Fi network and the separate boosted signal from the extender. Instead, the mesh network intelligently moves your devices between the nodes based on which will provide the best signal, how many devices are connected to each node, and more.

Gigaclear charges £49 a month for speeds of 300Mbps and a mesh network provided by Linksys. For speeds of 900Mbps, that cost rises to £79 a month.

Of course, these three are only a fraction of the new Internet Service Providers (ISPs) coming onto the scene each month. The ongoing public health crisis has highlighted the problems with the broadband infrastructure across the UK and spurred a number of new firms to act – and start connecting homes with future-proofed gigabit-capable cables.

Alongside these new rivals, more-established ISPs like BT, Virgin Media and TalkTalk are working fast to upgrade connections nationwide too.