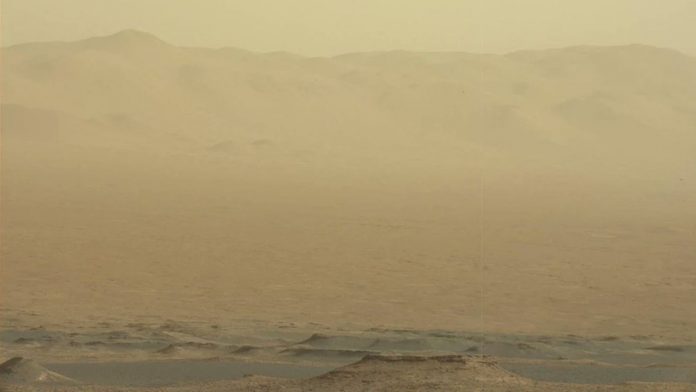 A huge dust storm is raging on Mars and has knocked out NASA’s Opportunity rover as harsh conditions overwhelm the planet and blocks out the sun.

Officials are hoping the solar-powered rover will make it through the storm, which has already engulfed a quarter of the red planet and is expected to expand over the coming days.

On the other side of Mars, another rover called Curiosity, which is nuclear-powered, is beginning to detect increasing levels of the dust.

“Forecast: Dusty with a chance of dust. I’m keeping an eye on this storm,” it wrote. “It blocked out the sun over @MarsRovers’ Opportunity (hang in there, sis!) and has begun to show up here in Gale Crater on the other side of the planet. I’m safe. Science continues.”

It could take up to several months until the dust clears enough for sunlight to reach the surface and recharge Opportunity’s batteries.

The rover’s project manager John Callas, who works at NASA’s Jet Propulsion Laboratory in California, said Opportunity was “by no means out of the woods”.

Flight controllers have been trying to contact the rover but have not received any response.

Opportunity was launched along with another rover – Spirit – in 2003 to study rocks and soil. The two landed in 2004.

Spirit has not worked for several years but Opportunity has defied odds and continued to work past its expected mission lifetime.

Scientists are not as concerned about the newer Curiosity rover.

They are also not worried about Opportunity becoming buried or stuck as only a layer of fine dust is left behind during even the worst storms on Mars, where winds can reach up to 70mph.

However, they are concerned about dust temporarily covering its optical instruments.

The storm, which has been developing since the end of May with unprecedented speed, is not the first the rover has seen.

Another large dust storm in 2007 left Opportunity silent for a few days but it came back to life after waking from a self-protecting shutdown.