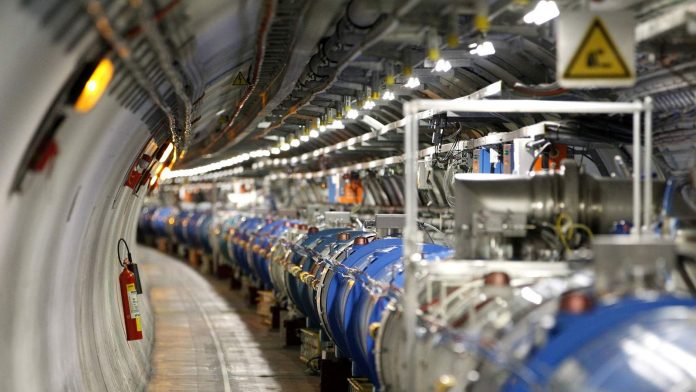 A  major upgrade to the Large Hadron Collider (LHC) is under way, with scientists hoping to produce four times more “God particles” a year and unlock further secrets about the universe’s existence.

The physics research centre CERN launched the upgrade six years after the particle accelerator confirmed the existence of the Higgs boson.

The so-called “God particle” – along with an associated force field – allowed researchers to better understand where matter gets its mass from.

Scientists said the revamp would boost the “luminosity” of proton-smashing experiments at the LHC, which is a 17-mile ring beneath the Swiss-French border, and produce a clearer picture of the sub-atomic world.

CERN director-general Fabiola Gianotti said: “This will allow us to address new questions, the outstanding questions in fundamental physics, with more opportunity to find answers.”

The improvements are scheduled to take up to a decade to complete and will involve a materials budget of 950 million Swiss francs (£717m). It is hoped they will allow the LHC to provide more data about particle collisions every year.

Changes will focus on the beams of the protons that are smashed together, increasing luminosity and allowing more collisions to take place, which means there will be more chance of researchers spotting unusual activity.

The LHC produced three million Higgs bosons last year. But after the upgrade CERN said it would be producing at least 15 million “God particles” a year.

It will allow physicists to become better acquainted with the particles while looking for others and searching for answers about anti-matter, the Big Bang and the start of the universe.

The revamp – likened to replacing a 60-watt lamp with an industrial floodlight – could provide answers about “dark matter” too.

“For me personally, solving the mystery of the dark matter of the universe would be something great,” said Ms Gianotti.

“Of course it would be fantastic to produce the dark matter particle in the collision of LHC beams.”

Any discoveries could provide a boost to science and technology in the future, potentially speeding up manufacturing processes or computers.

The upgrade could also see further Nobel prize wins. Peter Higgs and Francois Englert won in 2013 after the LHC proved their 50-year-old theory of a missing boson.

Ms Gianotti said: “We will see. We’re in the hands of nature.”