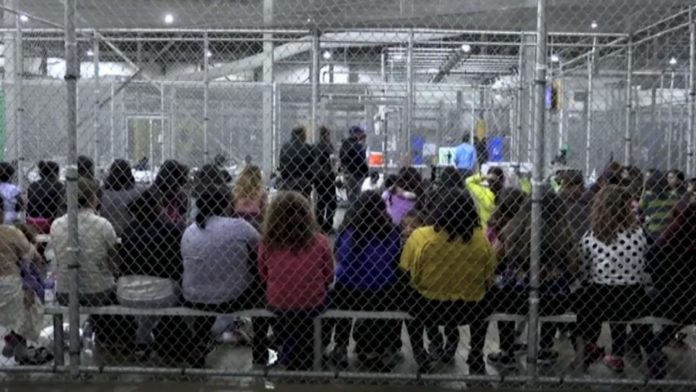 Donald Trump has had it in mind for some time.

Separating children from their parents was first floated by the then Homeland Security Secretary, John Kelly, back in March last year as a way of “deterring more movement along this terribly dangerous border”.

The backlash did for it then, and it is quite possible the backlash will do for it again now it has become an ugly reality.

And it has become a reality because administration officials – faced with an increase in illegal border crossings – see an opportunity to make a political point.

As images seep out of children and babies being kept in detention centres, sometimes in cages, away from their families, Democrats and Republicans are up in arms.

But Trump – and other supporters of the policy – are using the controversy to blame Democrats for not reaching a broader immigration deal which includes funding for Trump’s much vaunted, but as yet unfinanced, border wall.

It is all pretty cynical stuff.

The separations happen because the Attorney General, Jeff Sessions, has ordered that adults crossing the border illegally should be prosecuted rather than returned home.

This effectively puts them into a criminal justice process that requires children to be kept somewhere other than an adult jail. Hence the separations.

The problem is that it can be weeks or months until children are reunited, and in some cases parents are sent home on deportation flights without their kids.

The backlash is not just from the liberal elite or celebrity backers of the Democrat Party. It is from across the board: Democrats, Republicans and even Evangelical supporters of the President.

One of the architects of the proposals , Stephen Miller, one of Trump’s senior policy advisers, insists that no nation can have “whole classes of people who are immune from immigration law or enforcement.”

And Donald Trump himself is unleashing tweets and making speeches berating the Democrats and drawing parallels with “failed” immigration policy in Europe. He is talking tough and showing little sign of backing down .

But the kids being held in these terrible conditions at the border are part of this much larger game which involves Trump trying to persuade the Democrats to back big reforms to legal as well as illegal immigration. .

Trump wants to switch to a “merit-based” system, which he believes will raise the educational attainment of legal immigrants – while also cutting their overall numbers .

He want that system plus the wall and he wants it soon. The question now is who blinks first …the Democrats or Donald Trump.

The danger for the President is that the pictures create a reaction that becomes so toxic even his core support begins to question the policy.

When that happens – and there are signs it already is – then the administration will probably have to find a way to extricate itself from the problem. Trump can do it unilaterally by executive order.

When both Mr Turmp’s wife Melania and former First Lady Laura Bush enter the debate, with the latter pouring scorn on the policy as cruel and un-American, then it’s probably only a matter of time before it stops.