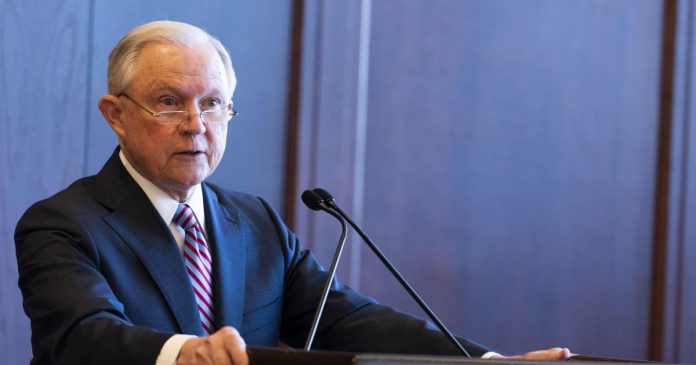 Attorney General Jeff Sessions and Department of Homeland Security Secretary Kirstjen Nielsen defended the Trump administration’s enforcement of its “zero tolerance” policy, despite widespread outcry over treatment of children at the nation’s border. Under the current policy, anyone suspected of crossing the border illegally faces criminal prosecution. Children traveling with adults are separated from their families and taken into U.S. custody. U.S. protocol prohibits detaining children with their parents because the children are not charged with a crime while the parents are.

The two cabinet officials appeared to put the work on Congress to craft new immigration legislation to handle such issues when addressing a gathering of the nation’s sheriffs in New Orleans for the National Sheriff’s Association annual conference on Monday.

Secretary Nielsen told the group of sheriffs “don’t believe the press” and that children detained “are very well taken of.” The Department of Homeland Security (DHS) said Friday that nearly 2,000 children have been placed into shelters over a six-week period.

The secretary blamed members of Congress, the press and advocacy groups for spreading “misinformation” about the family separation process, saying that DHS is simply “enforcing the laws passed by Congress” and that her agency would “not apologize for doing our job.”

“Surely it is the beginning of the unraveling of democracy when the body that makes the laws rather than change them asks the body that enforces them not to enforce the law, that cannot be the answer,” she said.

Nielsen added, “Illegal actions have and must have consequences, no more free passes, no more get out of jail free cards. In communities every day, if you commit a crime police will take you to jail regardless of whether you have a family.”

“We do not have the luxury of pretending that all individuals coming to this country as a family unit are in fact a family,” said Nielsen.

Sessions, meanwhile, blamed previous administrations for allowing “loopholes” that led to immigrants crossing the border illegally with children, effectively given them immunity from prosecution.

“Word got out about this loophole with predictable results. The number of aliens illegally crossing with children between our ports of entry went from 14,000 to 75,000 — that’s a 5-fold increase — in just the last 4 years. This cannot continue,” Sessions said.

He urged that despite the current policy, the Trump White House does not want to separate children from their parents.

“We do not want adults to bring children into this country unlawfully, placing them at risk,” he said. “This country is dedicated to caring for those children.”

Sessions added “If we build the wall, if we pass legislation to end the lawlessness, we won’t face these terrible choices. We will have a system where those who need to apply for asylum can do so and those who want to come to this country will apply to enter lawfully.”