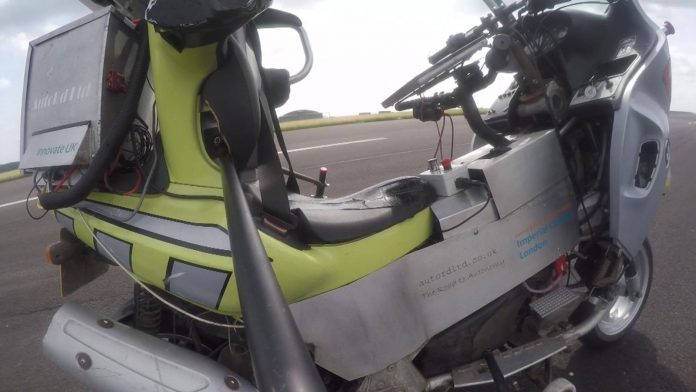 Sky News has been given an exclusive ride on the first self-driving motorbike.

The BMW C1 can steer, control its speed and keep itself upright without any human intervention.

It is the first step towards a fully autonomous machine that could whisk passengers through city traffic far more safely.

Engineer Torquil Ross-Martin has set up a company, AutoRd Limited, to develop the bike.

He said the on-board computer reacts far more quickly than a brain to dangerous situations, such as a gust of wind or an obstruction.

“A computer can do a better job than a human can because it is always concentrating.

“When commuting you are not necessarily completely focussed on what you are doing.

“You are thinking about what you are going to do when you get to the office or whether you are running late.

“That’s where the bike will improve the safety for commuters.”

Sensors on the bike can detect the direction and speed of movement so the computer can tell if it is falling to one side.

Small corrections in the automatic steering instantly re-balance the bike.

I was the first journalist to be allowed to ride as a passenger.

The bike swayed from side to side – a little unnervingly – until it picked up speed.

But the rest of the route was smooth. By the time we tilted to one side to turn around I was confident that I wouldn’t need the ‘kill switch’ that I had my finger on.

It was a remarkable – if slightly eerie – insight to a future in which autonomous bikes are the ultimate urban taxi.

But for now the prototype is being used in conjunction with AB Dynamics to test how autonomous cars react to motorbikes.

Currently checks are done with soft targets, such as foam cut-outs, because the risk to a human rider would be too great.

“Motorbikes are really agile and often faster than cars,” he said.

“They can weave in and out of traffic and accelerate really hard.

“Soft targets have a different radar signature, so that’s why you need to use a motorcycle for realistic testing.”

The bike needs to be fitted with LIDAR laser equipment – already used on autonomous cars to detect objects – before it is road-ready.

It will need extensive development work and AutoRd is looking for a commercial partner.