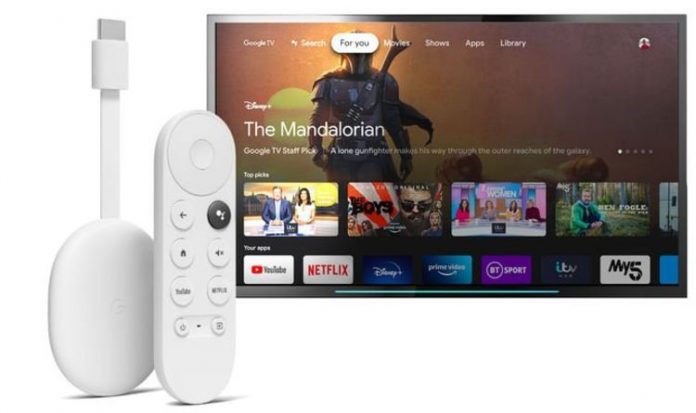 The Chromecast with Google TV is about to plug one of the biggest gaps in its app library. Yes, Google has confirmed that Apple TV will become available on the streaming dongle in early 2021.

Chromecast with Google TV was announced back in September and represents a dramatic shift for the Chromecast brand. Until now, these hugely-popular devices were designed to be controlled entirely from a smartphone or tablet, with streaming services like Netflix and All 4 incorporating the Cast button into their iOS and Android apps to beam the episode or movie onto the big screen. The Chromecast itself didn’t have a menu system, or any apps of its own – it relied entirely on users having access to other gadgets. Tabs from a Google Chrome web browser could also be shown on the telly – a nifty trick when trying to boost productivity while working from home.

But with the arrival of Chromecast with Google TV, the HDMI dongle added a remote control and a rich menu with its own apps optimised for the big screen. Built on the existing Android TV software, Google TV brings a load of personalisation and recommendations to the table. Based on your viewing history, Google will recommend new shows and films that it thinks will appeal to your tastes. Rotten Tomatoes scores are also displayed on the main menu – helping you quickly assess whether a new movie is worth your time, or one to hastily swerve.

Since Chromecast with Google TV builds on Android TV, it launched with a pretty solid selection of streaming apps, including Disney+, Netflix, Amazon Prime Video, BBC iPlayer and ITV Hub, to name a few. However, there were a few notable holdouts, including All 4 and Apple TV. While the former includes a Cast button inside the iOS and Android app, so you can beam it to the Chromecast with Google TV as a workaround, Apple does not support this feature in its TV app – leaving users no choice but to wait for a new version of the app to be launched on the latest Chromecast hardware.

MORE LIKE THIS
Roku now has something Chromecast, Apple, and Fire TV cannot match

When it launches early next year, Apple TV will bring access to Apple TV+ original shows like The Morning Show, Defending Jacob, and Ted Lasso, as well as original movies like Boys State, Greyhound and The Banker. These exclusive original shows from Apple TV+ will also be integrated into Google TV’s aggregation system too, so they can be recommended based on your interests. TV+ costs £4.99 a month, although anyone who bought a new Apple device at the end of last year will have access to the service for free until February 2021. So, fingers crossed the new Chromecast app launches before then.

However, even if you’re not interested in the content available on Apple TV+, there’s still plenty of reasons to be looking forward to the arrival of the new app.

Apple TV offers access to previously purchased content from iTunes too, including any old digital copies of films or TV shows. And if there’s something that’s available at a cheaper price from Apple than the Google Play Store or Amazon Prime Video store, you’ll be able to buy and rent from within the Apple TV app too. Between all three stores coming to the Chromecast, you should always be able to find a title – or a price – that you’re looking for.

Any Apple TV channels that you’re already subscribed to will be available within the Apple TV app on Chromecast with Google TV too.