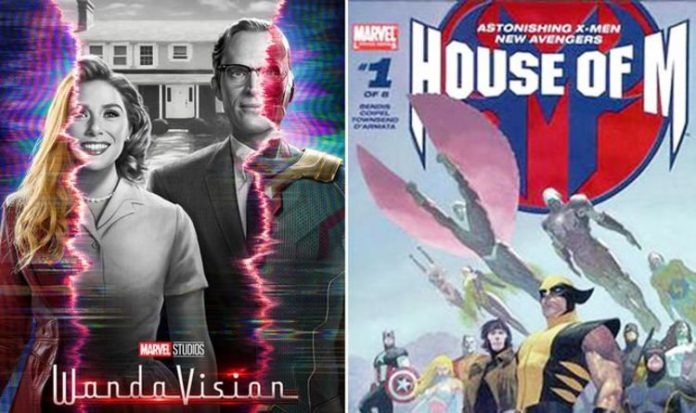 Marvel Studios’ first Disney+ show is certainly a bold entry for the MCU’s Phase 4. Despite having perished in Avengers Infinity War, Vision has married Scarlet Witch and the couple are somehow living in a 1950s Pleasantville-esque sitcom world; one that is slowly moving through the decades. Fans have been wondering what’s going on but Marvel comics storyline House of M may hold a clue to WandaVision’s ending.

Translated into English, this means House of Contempt and since the French word begins with M we can assume Marvel Studios is referencing the House of M storyline.

In both the comics and movies, Scarlet Witch is a mutant member of the X-Men who can manipulate reality.

And in House of M, Wanda used her incredible ability to construct a new world as a way of dealing with trauma and to recreate her lost children.

Speaking with Variety, Vision star Paul Bettany confirmed WandaVision is a mashup of House of M and another Marvel Comics storyline, The Vision.

The 49-year-old said: “We talked about two comic book stories that I really love: House of M and The Visions.

“[It] is a story about Vision trying to build a family in suburbia and it was sort of a mash-up between them.

“And also with a sort of loving look at American sitcoms throughout the American century. I was like, ‘I’m in!’”

Well in House of M, Wanda undid her false reality and restored Earth-616, however she depowered most of the mutant population.

The reason being that she had become angry with her father Magneto and his obsession with mutant dominance.

But since the movie X-Men were in the Fox universe, Den of Geek reckons the MCU’s Wanda will do the opposite and bring them in.

After all, Disney now owns the rights to previous Fox properties X-Men and the Fantastic Four.

While Wanda’s brother Quicksilver perished in Avengers: Age of Ultron there was a version of the speedy mutant in the Fox X-Men movies played by Evan Peters.

Well, interestingly he’s rumoured to feature in WandaVision in a mystery role which some fans believe will be as his incarnation of Quicksilver.

With this in mind, and the fact that Marvel Phase 4 is exploring alternate realities, perhaps the Fox X-Men universe will be introduced to the MCU multiverse.

After all, in Spring an alternate Loki series hits Disney+, at Christmas Untitled Spider-Man 3 is bringing back Sony incarnations of Peter Parker and 2022 sees a movie heavily featuring Scarlet Witch called Doctor Strange in the Multiverse of Madness.