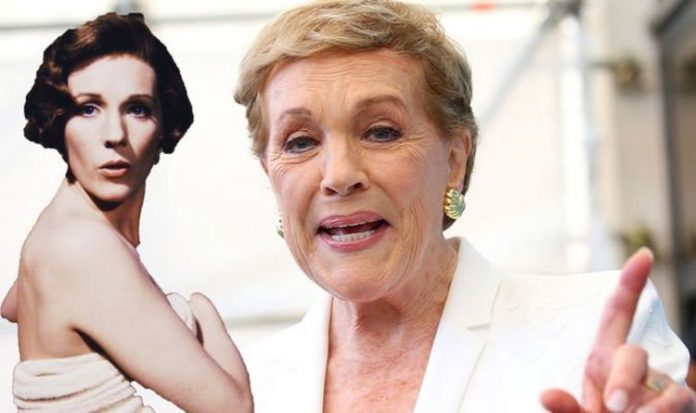 The actress’s director husband Blake Edwards was shooting a scene for their adult comedy Ten with Dudley Moore.

Julie described the moment: “He said, ‘Julie, you’ve just gotta come on over here, it’s an unbelievable sight.’ So I went dashing over.

Julie plays the film star wife of a Hollywood producer who has just made the biggest flop of his career. Losing his sanity he spends his fortune buying the rights to the movie and remaking it as a soft-core pornographic musical

In the climactic moment of the movie within the movie, Julie’s character Sally Miles pulls down the top of her dress and reveals all.

As always, she was not fazed at all and found the humour in the situation.

Talking about it on the Graham Norton show, she said: “I had to go topless, but it was very legitimate in the script.”

Norton suggested everyone must have told the Oscar-winning legend not to do it, but she said: ‘I’d done an awful lot by then and it took ten years to get the movie made, so I’d had ten years to think about it.”

Andrews admitted that there was one downside, though, to stripping on camera.

Andrews was on the sofa with Hollywood stars Channing Tatum and Jonah Hill.

Tatum also has experience of stripping off on camera and pointed out the cold is worse for men’s private parts.

Andrews gestured to her chest and laughed, saying: “It was very cold in the studio, goosebumps don’t look particularly good on camera, do they?”