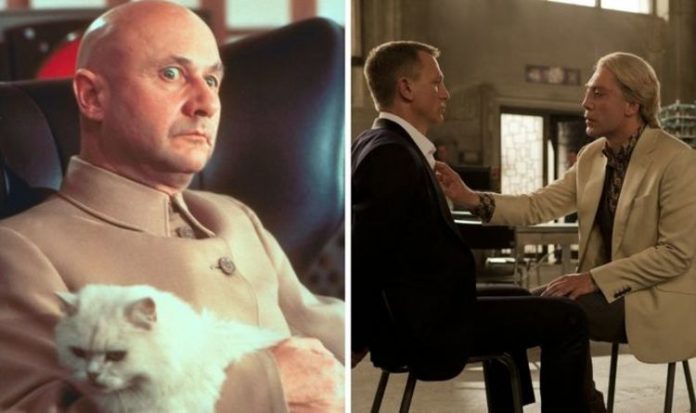 James Bond has had some difficult adversaries over the years. From Jaws to Blofeld, those he has fought against have ranged from intelligent magnates to powerful men of brawn. But which Bond villain has been the most entertaining to watch? Fans now have the chance to decide.

James Bond’s first adversary is Dr Julius No, a villain who some have suggested may be making a return in No Time to Die.

Dr No, played by Joseph Wiseman, wants to topple the Cape Canaveral missile launches using a nuclear radio beam, but Bond is able to overload the reactor so his plan is foiled.

The villain dies after boiling to death in a cooling vat, which is why some have wondered if Safin’s apparent facial scars are making reference to Dr No’s hideous fate.

After him is Colonel Rosa Klebb, who seeks to avenge Dr No’s death by killing Bond in a sex scandal, while also stealing a device from the Soviet Union.

However, it turns out she is only part of the scheme, as it was Bond’s most dangerous enemy, Ernst Blofeld, who is behind everything, though the pair do not meet.

Rosa dies after Bond evades SPECTRE’s attempts on his life when she is shot by one of Bond’s allies, but Blofeld escapes.

Which is the best James Bond villain? (Image: Eon)

Goldfinger is named after the villain Auric Goldfinger, who wants to turn gold in Fort Knox into a nuclear weapon, but Bond helps to stop this from happening before Goldfinger is sucked out of a plane.

Thunderball sees the return of Blofeld, though again he does not meet Bond, while Emilio Largo attempts to steal nuclear warheads in an extortion deal.

His mistress, Domino, sees the back of him after shooting him with a harpoon, and Blofeld escapes once again.

In You Only Live Twice, Blofeld and Bond finally meet when the enemy tries to trigger a war between the US and Soviet Union, but Bond destroys the spacecraft which would have been used in Blofeld’s devilish plan.

Blofeld survives, though wounded, and turns up plenty more times, such as in the following movie, On Her Majesty’s Secret Service, at which point Bond has been taken over by George Lazenby.

Blofeld survives once more but kills Bond’s new wife at the end of the film, signalling his return to the MI6, with Sean Connery taking the role back on in Diamonds Are Forever.

In this movie, it is Blofeld again who is trying to extort money from countries by threatening to set off nuclear weapons.

This time, he is presumed to have died, however, he returns unofficially in the opening of For Your Eyes Only, and of course we see him again during Daniel Craig’s tenure in the role.

In Live and Let Die the villain is Dr Kananga, who dies after ingesting explosives, after which Francisco Scaramanga is the main villain hoping to kill Bond and sell a destructive device in The Man with the Golden Gun

Karl Stromberg is the next villain in The Spy Who Loved Me, though his henchman, Jaws, becomes even more famous with his frightening golden teeth.

Neither survives to Moonraker, the following film, where Hugo Drax is attempting to kill off the human race from outer space, though Bond kills him and ejects him into the vacuum of space to die.

In For Your Eyes Only, Aristotle Kristatos is the main villain, trying to steal a missile for the Soviet Union, but he is stabbed to death, after which Prince Kamal Khan and General Orlov attempt to detonate a nuclear warhead to aid the Germans in conquering Europe.

Bond disarms the bomb and foils Khan’s escape plan, and both are killed in different ways.

Christopher Walken’s Max Zorin is the next enemy in A View To a Kill, who wants to destroy California and start a microchip monopoly with the help of his companion, May Day (played by Grace Jones.)

He falls from the Golden Gate Bridge after May dies smuggling a bomb, turning on her former lover.

At this point Timothy Dalton is in the role of Bond and, in The Living Daylights, is up against General Georgi Koskov and Brad Whitaker, who are supplying the Soviets with weapons.

The general is arrested and believed to have been executed, while Brad is killed by a bust of Wellington when Bond pushes it on to him.

In Licence to Kill it is Franz Sanchez, a drug smuggler, who is set on fire by Bond, after which Pierce Brosnan’s turn as Bond sees him take on Alec Trevelyan (played by Sean Bean), a false MI6 agent who wants to destroy London’s economy.

In Tomorrow Never Dies, Elliot Carver is the main villain, who wants to start a war between the UK and Asia, but he dies brutally before The World Is Not Enough, in which Elektra King wants to create a nuclear meltdown to become an oil magnate.

She dies by Bond’s hand, as does her villainous friend, Victor ‘Renard’ Zokas, who is shot out of a submarine’s reactor core.

Gustav Graves is the enemy in Die Another Day, as he wants to provoke war between North and South Korea, but he is electrocuted in a very different manner to the following villains in Daniel Craig’s run as Bond.

This starts with Casino Royale, where Mads Mikkelsen’s Le Chiffre wants to recoup funds in a poker tournament, though he is shot by Mr White, another enemy assassin who is arrested by Bond.

In Quantum of Solace, Dominic Greene tries to create an artificial drought to sell water to Bolivia, but he is shot by an anonymous assassin, at a similar time to Mr White’s escape from MI6 custody.

Mr White does eventually die, taking his own life to avoid the poisonous trap left for him by Blofeld, who returns in Spectre.

Before that is Skyfall, where Raoul Silva, AKA Tiago Rodriquez, is the enemy, who wants to humiliate MI6 by killing M, on whom he wishes to take revenge.

M (played by Judi Dench) may die but Bond kills Raoul, before facing his toughest opponent yet as Blofeld returns, this time played by Christoph Waltz.

Blofeld is arrested and seems to appear in No Time to Die from his prison cell, though the other enemy is Rami Malek’s Safin, about whom little is known.

There have been some brilliant villains in the Bond canon, but it is hard to say who will be the one who may be able to beat Bond, if that ever happens.