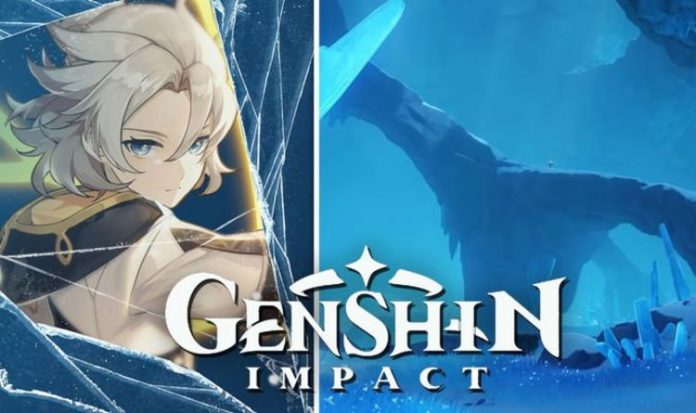 Popular free-to-play game Genshin Impact is about to get a massive update on PS4, iOS, Android and PC.

Titled The Chalk Prince and the Dragon, Genshin Impact update 1.2 has a December 23 release date on all platforms.

There’s no official launch time, although based on past timings, there’s a good chance it will be ready to go at 2am GMT UK time.

According to the pre-release patch notes, update 1.2’s headline feature is the addition of a brand new map called Dragonspine.

The new area is a frozen mountain range featuring an entombed city, a glowing tavern and a dangerous valley.

Wyrmrest Valley is described as the final resting place of the black dragon. Its life force is said to have dyed the valley’s silvery snow a scarlet red.

Starglow Cavern, meanwhile, is “a great cavern spanning the depths of Dragonspine”.

Developer miHoYo continues: “Peculiar glowing vegetation grows throughout the cavern, illuminating even the deepest, darkest passages with its frigid glow.”

Finally, the Entombed City is described as an ancient location that “lies silent beneath the eternal ice”.

Players will need to be wary when visiting Dragonspine, as the location is dangerously cold.

“Characters will continuously accumulate Sheer Cold in the Subzero Climate,” miHoYo explains. “When Sheer Cold reaches its limit, they will start losing HP.”

Genshin Impact update 1.2 also adds a new character to the free-to-play adventure game. Albedo is the Chief Alchemist and Captain of the Investigation Team of the Knights of Favonius.

Albedo launches with a new seasonal event, but only for players who reach Rank 20 and have completed the Archon Quest For a Tomorrow Without Tears.

“If not for Sucrose, no-one would have known that Albedo is hiding a great secret — one that involves a mysterious unknown sword and a mountain entombed in ice for millennia. Onwards and upwards, Traveler! In spite of the bitter cold.”

Other new features include an improved Chat feature, as well as trackable map pins. You can see additional patch notes below.

“When the Auto option is selected, dialogue will automatically progress to the next line once the current line’s audio finishes playing. When dialogue options appear, it will pause to allow Travelers to respond, then continue to auto-play as before.”

View dialogue for quests I have already completed: “Version 1.2 adds the Travel Log section to the Archive. All dialogue (text and audio) from previously completed Archon Quests and Story Quests will appear here. This way, Travelers can re-read and playback the dialogue from completed quests.”

Progress interrupted when a player quits the game: “In the next version, Travelers are free to leave Co-Op Domains at any time without interrupting the battle for other Travelers. Also, during Co-Op sessions, the host will be able to disband the Co-Op Team just by returning to Single Player Mode. After the team is disbanded, Travelers’ own game progress will be restored.

New rewards: “In Version 1.2, Travelers will be rewarded with 1 Acquaint Fate each time they ascend a character at level 20, 50, or 70. And for any previous characters that Travelers have ascended, you can claim the Acquaint Fate rewards from the Ascension Materials Preview screen.”