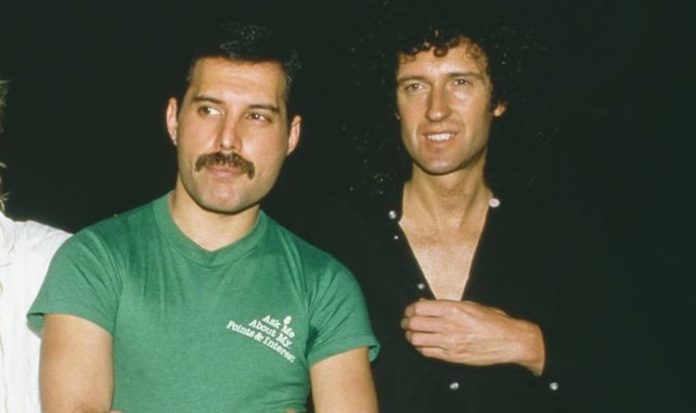 Brian May has been busy promoting various new projects over the past few weeks. The recent release of new album and film, Queen + Adam Lambert: Live Around the World, gave the band yet another Number One hit. May has also been working on a side-project in aid of Breast Cancer, I Am Woman, featuring four West End leading ladies. Of course, everybody still wants to know about the legendary guitarist’s friendship and work with Freddie Mercury. SCROLL DOWN TO LISTEN TO FULL INTERVIEW

Brian was asked what it was like working alongside Freddie all those years.

He said: “Challenging and always entertaining. He was a very unpredictable guy but wonderful to work with.

“He had a great spatial awareness, and that’s something very important. If you’re working with people on a stage, you need to have musical contact, but you also need the kind of physical chemistry going on — the awareness of where you are and where you’re aiming your energy. Freddie was wonderful for that, and we just clicked from the very beginning.

READ MORE: Brian May explains HOW Queen and Freddie triumphed at Live Aid ‘It was very simple’

While Brian praised his bandmates’ extraordinary talents, he mentioned that Freddie had worked hard to make the best of his voice and abilities.

He said: “From the days when he was very much a trainee singer. He had all the presentation, he had that connection, and it was his amazing kind of skill that he managed to bring himself up to the point where he was using his talent to the best end.

“He really did work on himself. He was an incredible self-made man, I would say.”

Brian had previously admitted that he wasn’t sure Freddi was right for the band in the beginning.

In the new interview with Talk Radio, Brian also admits the band were sure that it was over when they lost Freddie on November 24, 1991.

He said: “We had this feeling that if one of us went then the band was over.

“For years I went driving around the country and other countries too, and if I saw an arena, thinking, ‘Ah yeah, we used to do that. Never going to do that again.’ And actually it wasn’t my intention or Roger’s to go back to it…”

Brian added: “But things happened. I bumped into Paul Rogers, who was a hero of mine and we did a gig together… We ended up going out on tour with him, Queen plus Paul Rogers and it felt great.

“It came to a natural end and again we thought, ‘OK, we don’t need to do this anymore. We’ve done it and it wouldn’t be right to keep on doing it.’

“Anyway, along comes this guy called Adam Lambert! Suddenly it’s a no-brainer. He can do everything we need a frontman to do. He’s not imitating Freddie but he’s very much a parallel talent, in terms of his expertise as a singer.”