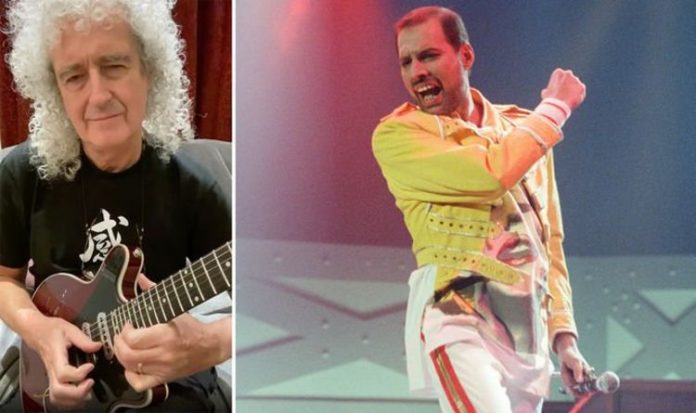 Freddie Mercury died tragically young at just 45-years-old back in 1991. But had the Queen singer lived to today would he still be touring with the band? Brian May certainly thinks so but admits Freddie had moments of doubt about growing old and struggling to perform.

When Express.co.uk spoke with May earlier this month, we shared how Freddie’s PA Peter Freestone felt the Queen singer wouldn’t have kept performing into his old age.

Freestone said: “I think he didn’t want to become old. He was a rock star and he filled that stage. I don’t think he would have kept going.

“He would have been like, ‘Darling, I’ll write the music but you go out and perform it with someone else.’

“Freddie would have felt he was letting fans down because he couldn’t give them his show. He always said, ‘Queen will never be four guys who come on stage, sing their songs and go.’”

READ MORE: Freddie Mercury ‘would be touring if alive today’ affirms Brian May

Nevertheless, May disagreed with Freestone saying: “I actually don’t think it’s true. I think like all of us Freddie would have moments of, ‘Oh god, it’s time I quit!’

“I think Freddie said, ‘I don’t want to be driving around in a f***ing wheelchair on stage.’

“We all have those feelings and then when it comes to it you probably do [go on].”

The 73-year-old said how Freddie lived each day as it came and would often change his mind.

Of course, Queen continues today as Queen and Adam Lambert with Brian May and Roger Taylor.

Both are now in their early seventies and show no sign of stopping despite the guitarist’s recent health problems.

Earlier this year, May suffered a heart attack and ripped his gluteus maximus while gardening.

Nevertheless, the tenacious 73-year-old is exercising for 90 minutes six days a week so he can be fighting fit for touring next year.

May also shared how he’s had to push on through knee trouble during recent Queen and Adam Lambert tours.

The Queen guitarist said: “I’ve been through a lot of pain onstage. Obviously, you grin and bear it because it’s worth it.

“The adrenaline gets you through. I had that period when my knees were falling to bits; really painful. But somehow you do get through that, you just do because you want to. The Queen legend admitted it’s worth it because “the audience makes you feel that that’s where you should be.”

Queen and Adam Lambert’s live album Live Around The World is out now.