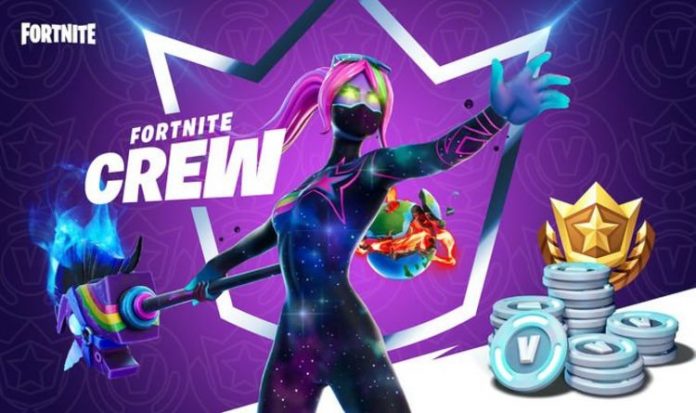 Titled Fortnite Crew, the subscription service will launch alongside Chapter 2, Season 5 on December 2.

Priced at £9.99 a month, subscribers will always have access to the current season’s Battle Pass, and receive a number of exclusive rewards.

This includes 1,000 V-Bucks every month, as well as monthly bundles featuring exclusive skins and cosmetics.

“When Fortnite Crew launches on December 2, subscribed members of the Crew will be the first to get this all-new exclusive Galaxia Outfit and Style plus the Cosmic Llamacorn Pickaxe and Fractured World Back Bling,” reads an Epic tweet.

“A Fortnite Crew subscription can be purchased in Fortnite from the Item Shop or Battle Pass purchase screen, and players can cancel anytime.”

You can see the Galaxia skin and Cosmic Llamacorn Pickaxe at the top of the page.

According to Epic, the items featured in the monthly bundles will only ever be available as part of the Fortnite Crew subscription. This means you won’t see them pop up in the Item Shop.

Epic has also revealed that future monthly Crew packs will contain a skin and at least one accessory.

Fortnite fans will be able to purchase a Crew membership directly from the item shop, and can cancel at any time by visiting the Fortnite Crew tab within the game.

“Even after cancelling, your membership will remain effective until the end of your current billing period,” Epic explains. “You will keep all previously awarded Battle Passes, V-Bucks, and Crew Packs.

“If you decide to come back to the Fortnite Crew, you can rejoin in-game on any platform.”

Likewise, if you sign up to a Fortnite Crew account after already purchasing the current Battle Pass, Epic will refund the 950 V-Bucks.

Another interesting detail is that starting with Season 5, the Battle Pass Bundle will be available as a separate purchase.

“The Battle Bundle has been replaced by a bundle of 25 levels, available for 1,850 V-Bucks.

“The offer is available to players at level 75 or lower at any time, once per season. This bundle can be packaged together when buying the standard Battle Pass by itself, or purchased after buying the standalone Battle Pass or acquiring it as a member of Fortnite Crew.”

Rumours of a Fortnite subscription service first emerged back in December 2019. The rumours would intensify earlier this month when Epic polled fans about the price of a possible monthly subscription.