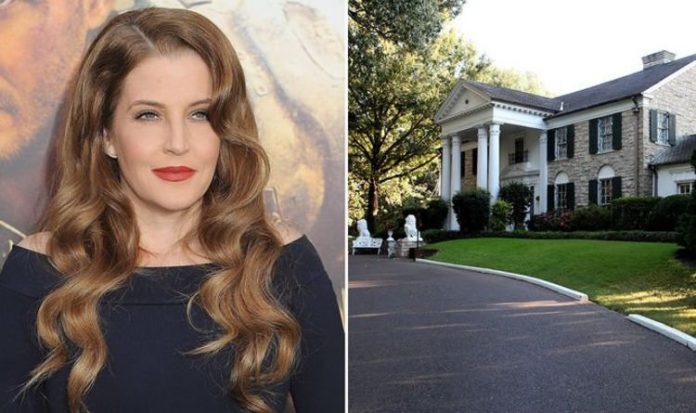 Following Elvis Presley’s untimely death in 1977, Lisa Marie inherited Graceland alongside The King’s father Vernon and grandmother Minnie. Then just three years later aged only 12-years-old, she became the sole beneficiary named in her father’s will. Lisa Marie’s mother, Elvis’ ex-wife Priscilla Presley, acted as executor and decided to open Graceland as a museum to the public in 1982.

Despite now being one of the most popular museums and tourist attractions in the USA, Graceland is still very much Lisa Marie’s home.

And now the Vice President of Archives and Exhibits at Elvis Presley Enterprises and Graceland has shared what The King’s daughter and her family get up to when they visit the Memphis mansion.

Answering fan questions as part of a virtual live tour of Graceland that Express.co.uk attended, Angie shared: “Graceland is Lisa’s home whenever she is here.

“The kitchen appliances work, but she normally has meals catered in.”

Angie added: “But they do come quite often. This is still her home.”

While later on in the video, another fan asked about the half-century-old kitchen appliances.

Angie said: “Yes the kitchen appliances do work. They’re turned off for fire safety, but they do still work.

“And when Lisa Marie and her family are here we fire then up and sometimes they’ll have dinner here in the mansion.”

Elvis’ only grandson, who looked a lot like The King, has been buried right by him in Graceland’s Meditation Garden.

His grave is on the other side of the fountain from Elvis, Vernon, Gladys and Minnie’s final resting places.

Graceland’s virtual live tours, which include a chance to pay respects in the Meditation Garden, can be booked here.