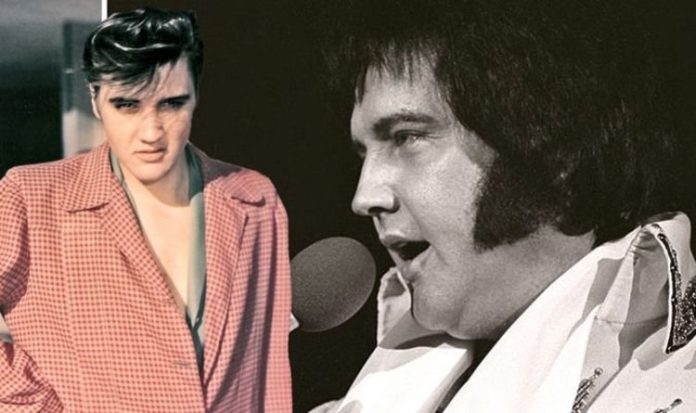 Elvis Presley tragically died on August 16, 1977. The King of Rock n Roll was best known for his work as a singer and a songwriter, and was the most famous artist on the planet throughout the 60s and 70s. The Blue Suede Shoes singer died of a cardiac arrest at his home in Graceland, Memphis. In the house at the time was his fiancée, Ginger Alden, and his daughter, Lisa Marie Presley.

However, despite the report of Elvis’ death and the subsequent funeral which saw thousands of attendees, theories have cropped up suggesting he is actually still alive.

Elvis’ distinct look and sound would have made him stand out in any crowd.

Because of this, it was reported the the King was sick of the limelight.

It was from here that rumours the star faked his death began.

Kelly added: “It is very strange, if it this wasn’t Elvis then why was he getting up in a hurry after?

“I took a picture [above], in fact, the bodyguard came towards me to keep me from taking another shot. I never dreamed this was going to happen.”

Kelly didn’t see the King again, but if it truly was him, the photos would prove he was alive in 1992, 15 years after his reported death.

There were further reports that Elvis was seen getting on a plane the day he was reported dead.

The account suggested a man who looked a lot like the 42-year-old was boarding a plane to Beunos Aires at the Memphis International Airport.

At the time, the King frequently gave the name Jon Burrows at the hotels he was staying at to stave off interested fans.

Could this have been the first piece of proof that the King had faked his death?