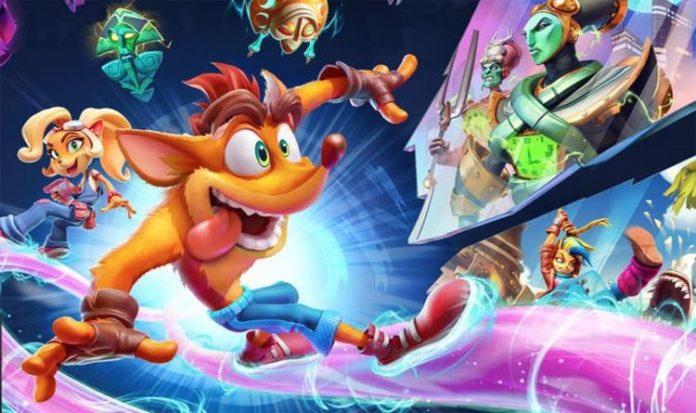 Crash Bandicoot 4 is back with the first original entry in the popular franchise for more than a decade.

Bursting on to the gaming scene in the late 1990s, the iconic mutant marsupial is primed and ready to put a fresh spin, jump and wump on conflicts of cosmic proportions.

With initial fan reviews deeming Crash 4 a worthy sequel – Express Online’s review will be live shortly – Activision has given fans a quick overview of everything you need to know, as well as some helpful gameplay hints and tips.

Crash Bandicoot 4: It’s About Time picks up after Crash Bandicoot: Warped, which was released back in 1998. Remember it? We last left Neo Cortex, Dr. N. Tropy and Uka Uka stranded on a distant planet. After decades of fruitless attempts, the trio finally made their escape, ripping an evil-scientist-sized hole in the fabric of space-time in the process. Now all that stands between them and total dominion over the multiverse are two fuzzy marsupials from N. Sanity Island.

Additionally, players will uncover new Quantum Masks throughout this time-shattering adventure. These guardians of space and time will give players the ability to bend the rules of reality and gain advanced ways to conquer dangerous obstacles.

Crash Bandicoot 4 embodies the precision gameplay we fell in love with in the ‘90s, while introducing visual upgrades, new gameplay mechanics and quality of life improvements.

Classic franchise fans will see an evolution of the Crash they know and love, with a fresh art style, larger-than-life boss battles, unseen sides of classic characters, new allies, along with Modern and Retro modes. In Modern mode, players will always continue from the last checkpoint, whereas in Retro mode, players have limited lives and can gain more by collecting Wumpa fruit, similar to the original Crash trilogy.

Ah, the new guardians of space and time. This brand-new mechanic will give players the ability to bend the rules of reality and gain advance ways to conquer dangerous obstacles.

– Ika-Ika (the Gravity Mask) inverts gravity giving bandicoots the ability to platform upside down when using this power-up.

– Kupuna-Wa (the Time Mask) slows everything down, giving players an advantage against enemies, moving platforms and exploding Nitro Crates while it’s activated.

– Lani-Loli (the Phase Shift Mask) phases walls, crates, platforms, hazards and other objects into and out of existence.

– Akano (the Dark Matter Mask) creates a whirlwind of energy that creates a continuous spin, allowing the wearer to break reinforced crates and change their movement mechanics.

No surprises here. It’s a fresh visual direction for Crash with wacky new worlds, lush epic vistas and an absurd variety of enemies and hazards. No need to panic though, the zany spirit of the franchise has been maintained.

Classic franchise fans may want to stay true to the original characters Crash or Coco, but three new playable characters, each with a unique playstyle, will emerge in the platformer, including the fiendish Neo Cortex, Dingodile, or better yet, Tawna – Crash’s old flame. Equipped with spin kicks and a versatile hook-shot ability that allows her to traverse levels and attack enemies, Tawna feels as powerful as her new look!

Fans can expect formidable bosses and monumental battles with new and returning characters like they have never seen before. Did you expect anything less?

These bosses are bigger, meaner, and harder than ever before. Each one will put everything you have learned up to that point to the test. Be sure to watch the boss’s patterns carefully and look for the best opportunity to trigger the power of the Quantum Masks if they are with you during the fight. Using their special ability at the correct time could mean victory for our favourite marsupials!

Many zany unlockable skins will be available when the game launches, and PlayStation players will also get to enjoy additional time-shattering skins for Crash and Coco upon reaching the Dimensional Map. These skins, dubbed “Marsupus Erectus” and “Serious Upgrade,” will be available on other platforms no earlier than Dec. 31, 2021.

For those playing with friends there’s Bandicoot Battles – a local competitive mode where players can go H2H by either racing to the finish line in Checkpoint Races or shooting for the high-score in Crate Combo. Pass N. Play is a co-op mode, allowing two to four players to take turns progressing through levels in either normal or N. Verted modes. Just make sure you pass the controller to the next player when it’s their turn.

The core cast of characters that fans know and love, combined with unique challenges; expansive new worlds; advanced platforming tricks like wall-running, rail grinding and rope swinging; along with new power-up abilities, provides an amazing framework to differentiate this game from other action platformers.