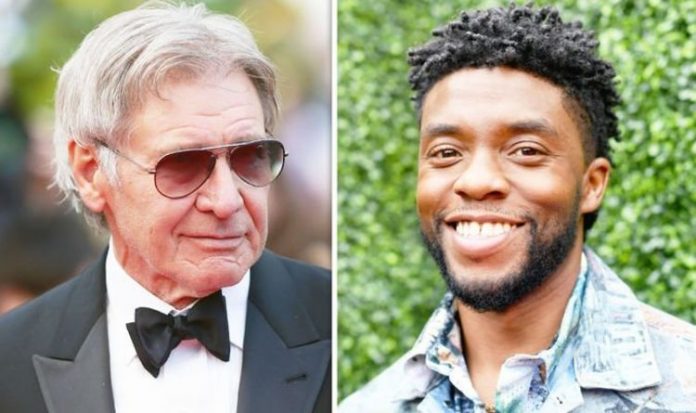 The legendary US actor, who famously brought Black Panther to life, will be remembered today on what would have been his 44th birthday. Boseman died in August after a secret four-year battle with colon cancer. Boseman carved his name in cinematic history with his iconic portrayal of Marvel’s King T’Challa. Among the scores of fans and celebrities who remembered the star in touching tributes, was Harrison Ford, who branded him “as much a hero as any he played”. Unearthed accounts from Boseman reveal that the Star Wars actor served as an inspiration to him and he studied his every move while they were on-set.

Boseman revealed that he would “circle the scenes on his schedule” when he was due to appear alongside Ford – an action which marked their importance to him.

He compared it to “getting up for the big game” and likened their partnership to the US’ biggest sporting matches between “Lakers–Celtics, Bulls-Detroit or Red Sox-Yankees”.

The star continued: “That’s what it is – so I just looked at it as, ‘This is why you play the game!’”

Boseman starred with Ford in the 2013 biopic 42 about the legendary baseball star Jackie Robinson – the first black athlete to play in Major League Baseball.

Robinson was attributed with bringing an end to racial segregation in the sport and had suffered abuse from his teammates on the Brooklyn Dodgers and fans.

Boseman revealed that he had learned a lot from Ford – who interviewer Bonnie Laufer Krebs described as an actor who had “been around for a while”.

He said: “You learn from his experience, there are certain things you can ask him that you don’t learn when you go to acting school.

“You don’t learn those things in a classroom and you’re not going to learn on other sets because he’s played the lead before that’s what he is, he’s a leading man.”

The 78-year-old continued: “His intelligence, personal dignity and deep commitment inspired his colleagues and elevated the stories he told.

“He is as much a hero as any he played. He is loved and will be deeply missed.”

The Jackie Robinson Foundation, which aims to help young people of colour to succeed in education, posted a tribute on Twitter.

They said that Boseman “studied extensively” for his role in 42 and “spent considerable time” with Rachel Robinson, the widow of the sportsman who died in 1972.

The actor was described as a “consummate professional” who “absorbed every story, every memory and every photo and film excerpt he could consume”.

They felt that time allowed him to “translate the soul of an American hero” and added: “Now, he will be etched in history as a hero in his own right.

“Especially having shown millions of Black and Brown children the power of a superhero who looks like them.

“Chadwick – may you rest in peace eternally. Take your place among the greats. You earned it.”