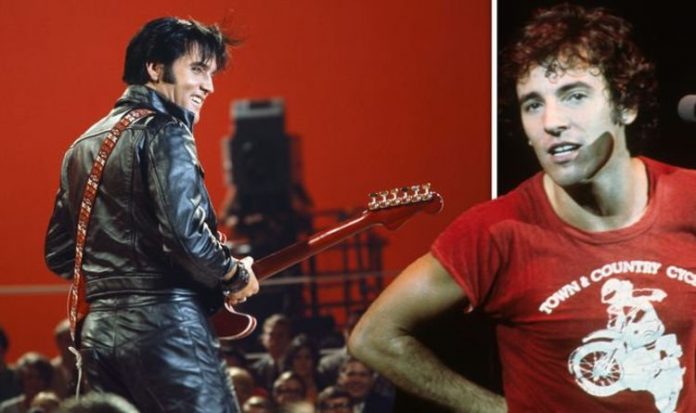 Springsteen has explained how his life changed when he saw Elvis appear on The Ed Sullivan Show in the 1950s, kickstarting his passion for music. Fast forward 20 years, and the rising star was desperate to meet his idol, by any means necessary. After starting the E Street Band, he began touring America, eventually leading him to Elvis’ home town – Memphis, Tennessee.

Springsteen explained how, during this trip, he was struck with the idea to pay Elvis a visit.

He said: “Back in ’75… We were down in Memphis, and I remember it was late at night, and I was sittin’ in a motel room with me and my guitar player, Steve. We got a taxi to take us out to Elvis’ house.

“It took us out there in the middle of the night, and I remember we got outta the cab, and we stood there in front of those gates with the big guitar players on ’em.”

Standing there, Springsteen was excited to see that somebody was still awake inside the house.

The Dancing in the Dark singer continued: “And when we looked up the driveway, in the second story of the house, you could see a light on, and I figured that Elvis has gotta be up readin’ or somethin’.

“And I told Steve, I said: ‘Steve, man, I gotta go check it out.’ And I jumped up over the wall and I started runnin’ up the driveway, which when I look back on it now was kind of a stupid thing to do because I hate it when people do it at my house.”

He continued: “I was filled with the enthusiasm of youth and ran up the driveway and I got to the front door and I was just about to knock, and guards came out of the woods and they asked me what I wanted.”

The star continued: “I don’t think he believed me, though, ’cause he just kinda stood there noddin’ and then he took me by the arm and put me back out on the street with Steve.”

Years after the attempted break-in, Springsteen reminisced on that night, and wondered what would have happened if he came face-to-face with his hero.

He said: “Later on, I used to wonder what I would have said if I’d knocked on the door and if Elvis had come to the door because it wasn’t really Elvis I was goin’ to see. But, it was like he came along and whispered some dream in everybody’s ear, and somehow we all dreamed it. And maybe that’s why we’re here tonight, I don’t know.”

The star last performed at Barack Obama’s presidential inauguration, where he played This Land is Your Land alongside Pete Seeger.

He will be playing alongside a number of huge stars including Jennifer Lopez, Justin Timberlake, and Fall Out Boy.

Lady Gaga, one of Biden’s biggest celebrity supporters, is also performing, and recently posted her excitement on Twitter, writing: “I am deeply honored to be joining @BidenInaugural on January 20 to sing the National Anthem and celebrate the historic inauguration of @JoeBiden and @KamalaHarris!”

Springsteen and the other artists will be part of a celebration that will last 90 minutes once the inauguration has come to an end.