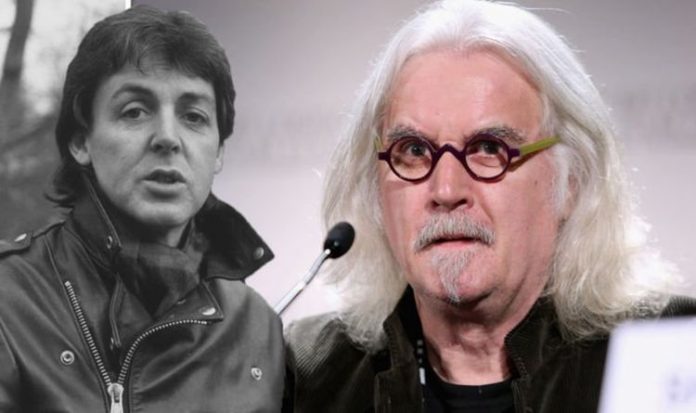 Billy Connolly has been working comedian stages for over 50 years at this point. The Scottish funnyman is seeing out his career with one final TV show this evening, showcasing some of his biggest and best career highlights.

The show, titled Billy Connolly: It’s Been a Pleasure, will feature some of the comic’s greatest stand-up moments, interviews with celebrities, and some unseen footage from over the years.

The TV event will mark the end of Connolly’s career, a decision he made for himself due to his Parkinson’s diagnosis.

The 78-year-old was diagnosed with Parkinson’s Disease in 2013, and has since stopped embarking on comedy tours.

In the show, Connolly will speak frankly about meeting a collection of enormous stars over the years – including one of The Beatles, Sir Paul McCartney.

In an interview held to promote the show, Connolly was asked: “Is it true that Paul McCartney first came to see you out of curiosity because he heard you were being followed around by a priest?”

Connolly replied: “Aye, he was a Scottish minister called Pastor Jack Glass. He took objection to me doing a routine about the Last Supper, so he used to picket my shows and accuse me of blasphemy.

“He followed me all over Scotland and right into Wales. He died in 2004. He was a terrible prick. He had this band of followers who used to stand outside, sing hymns and hold banners saying ‘Repent!’ and all that.”

Despite this disruption, Connolly had an ace up his sleeve.

In an interview with David Sheff in 1980, Lennon revealed how he was a little upset by McCartney’s actions.

Lennon explained how McCartney had recorded Why Don’t We Do It In The Road irritated him, saying: “That’s Paul. He even recorded it by himself in another room. That’s how it was getting in those days.”

Lennon added: “We came in, and he’d made the whole record. Him drumming, him playing the piano, him singing.

“But he couldn’t… maybe he couldn’t make the break from the Beatles. I don’t know what it was, you know. I enjoyed the track.”

Lennon finally said: “Still, I can’t speak for George, but I was always hurt when Paul would knock something off without involving us. But that’s just the way it was then.”

Years later McCartney defended himself, saying: “There’s only one incident I can think of, which John has publicly mentioned.

“It was when I went off with Ringo and did Why Don’t We Do It In The Road. It wasn’t a deliberate thing, John and George were tied up finishing something, and me and Ringo were free, just hanging around, so I said to Ringo: ‘Let’s go and do this.’”

Watch Billy Connolly: It’s Been a Pleasure tonight at 9.30pm on ITV.