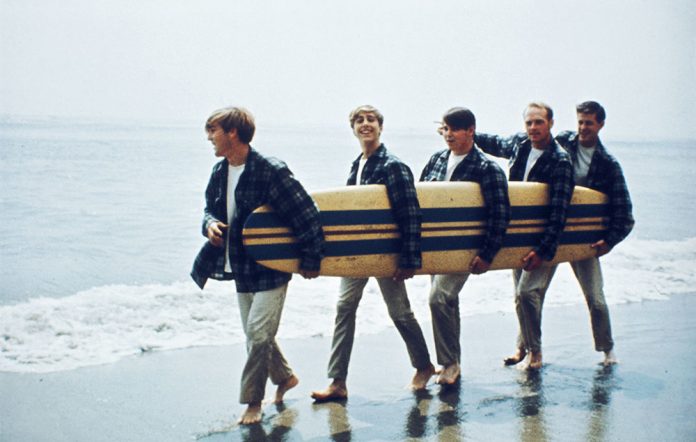 Shake that sea water out your ears

After a gigantic field at a festival, or maybe your local sweaty club – there’s probably no better place to listen to music than the beach. Whether it’s stone or sand, cold or warm water – there’s something about the fresh sea air and the blazing sunshine that makes music sound that little bit sweeter. Some albums are purposefully made for those scorching days and others just feel right, but we dare you to call the lifeguard on this absolutely correct list of records to crack on next time you’re by the sea.

Released in 2016, the French group’s sixth album was inspired by what they describe as their “European, Latin roots, a fantasized version of Italy” and celebrates all the good things in life like lust, prosecco, gelato and formaggio.
Why’s it so beach-ready? The album’s title track is a modern-day Italo-disco classic, while ‘Fior Di Latte’ and ‘Goodbye Soleil’ will stick to you like the sand between your toes.
SPF Factor: 40

Ti Amo, an album by Phoenix on Spotify

The Scottish producer spurned big EDM drops for belly flops on this guest-packed, throwback album of soul-infused pop.
Why’s it so beach-ready? ‘Slide’ and ‘Feels’ were Sound Of The Summer 2017™ contestants – and rightly so, it was blaring outside of every beach cafe on the continent during the heady summer months last year.
SPF Factor: 30

Joe Mount’s pop troupe opted for this nation’s fine shores for inspiration – the ‘The Bay’s music video was filmed in their native Torquay.
Why’s it so beach-ready? Although a major step up from 2008’s ‘Nights Out’, the group’s expanded production retained the naive charm of Britain’s slightly shit beaches.
SPF Factor: 15

The English Riviera, an album by Metronomy on Spotify

Before he swapped synths for symphonies, the English producer turned in this house wonder, with tropical elements providing colour alongside the album’s pounding pace.
Why’s it so beach-ready? It’s full of absolute heaters. ‘Paridesa’ is as vibrant as the exotic bird it shares a name with and ‘Kilibru’ hits harder than your shitty mate slapping your surnburnt patches.
SPF Factor: 45

Rojus (Designed To Dance), an album by Leon Vynehall on Spotify

The Melbourne lot match the vibrancy of their nation’s beaches with scorching riffs and singles bouncier than the beach ball coming to crush your sandcastle.
Why’s it so beach-ready? You could crack a cold tinnie open to this album and it would sound absolutely in tune with the laid-back nature of ‘Hope Downs’
SPF Factor: 35

Written, performed and produced all by psychedelic wizard Kevin Parker, ‘Currents’ is a one-man odyssey that proved to keep party raging all summer long in 2016.
Why’s it so beach-ready? It’s made up  of soothing dream-pop winners to watch the tide come in (‘Reality In Motion’) and what should be the closing song at every beach rave until the end of time (‘Let It Happen’).
SPF Factor: 30

Currents, an album by Tame Impala on Spotify

On Tyler’s fourth solo album, provocative lyrics and swampy beats are nowhere to be seen – instead teaming up with Kali Uchis, Rex Orange County, Frank Ocean and more for this lush entry into his burgeoning catalogue.
Why’s it so beach-ready? Perfect for those moody solo nights on the bay or with pals as the sun goes down – ‘Flower Boy’ is all about self-love and beauty, all with a gorgeous orange hue.
SPF Factor: 25

Flower Boy, an album by Tyler, The Creator on Spotify

The Velvet Underground’s sixth solo album was his gooiest and most romantic to date – ditching the punky vibes of previous material and opting for soft-rock jams.
Why’s it so beach-ready? Much of the album was influenced by NY’s chaotic but memorable beach town.
SPF Factor: 10

Coney Island Baby, an album by Lou Reed on Spotify

The Californian artist’s groovy second album saw him become one of the most in-demand live acts on the planet and landed him a co-sign from the King of LA, Dr Dre.
Why’s it so beach-ready? His first album was named after LA’s Venice Beach and this one was influenced by the splashy beach-town in Northern California.
SPF Factor: 20

Malibu, an album by Anderson .Paak on Spotify

We couldn’t in all good conscious go through this article without featuring this lot, could we? And who’s to stop us putting the Best Of in? Dare you.
Why’s it so beach-ready? It’s pretty self explanatory, but the group traded off the idea they were Cali beach bums, despite none of the group able to surf at all.
SPF Factor: 50

The Very Best Of The Beach Boys: Sounds Of Summer