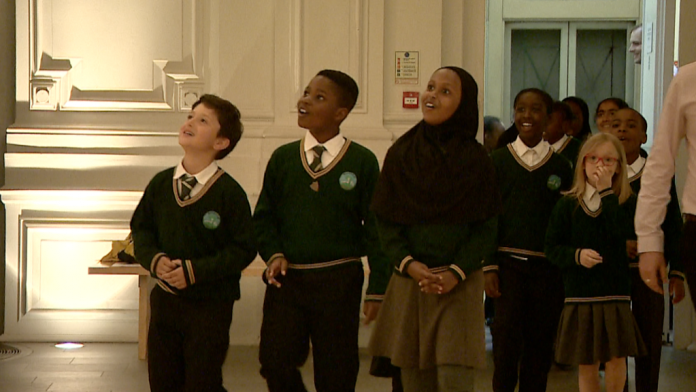 The Natural History Museum’s most famous resident is on tour – and the crowds gathering to see Dippy suggest a dinosaur love affair that’s far from extinct. But what explains this gut-level fascination for doomed reptiles from which we are separated by millions of years?

“Come and say hello to Dippy,” says the man in the video.

On that invitation, the schoolchildren enter a room and gasp at a skeleton. They are in awe and their reaction is beautiful.

The youngsters are enjoying the latest leg of Dippy’s tour and, despite this spectacle being a plaster cast of diplodocus bones, the famous replica still pulls in the crowds.

More than 22,000 tickets were snapped up on the first day of release for the Birmingham stopover, adding to the 153,000 people who visited during Dippy’s stay in Dorset.

Among the pupils is nine-year-old Zowda Ismail. “It’s nearly as tall as the roof,” she says. “I love dinosaurs. I like looking at the past.”

But for others, according to teaching assistant Carol Caseman, it’s about feeling the here and now: “It’s just brilliant. [The children] were just so excited when they saw Dippy for the first time.”

Never mind, then, Harry and Meghan or the cast of Love Island – the new “look at how he looks at her” is schoolboys swooning for femurs and tails.

But it’s the looking that reveals our case of dino-love to be a curious one.

At museums, we see skulls, yet skulls that are empty. And it’s near the emptiness, amid packed lunches and selfie sticks, that a funny exchange – or non-exchange – occurs.

Because it’s not so much the land that time forgot as the dinosaur that we forgot – the actual beings that once moved those bones.

With each displayed skeleton comes spectacle, but the animal to which it belongs is unseen and unknown.

According to academic Dr Will Tattersdill, it’s this that underpins an affection both layered and deep-rooted.

“Dinosaurs,” he says, “are everywhere and they’re nowhere – and that’s fascinating.”

The University of Birmingham lecturer specialises in how science is reflected in literature and popular culture and is researching the social history of dinosaurs – that is, our relationship with them since their discovery.

In August, he will give a talk in front of Dippy, addressing what goes on in our minds when we feel the dino-thrill.

Here’s how he thinks the everywhere – “dinosaurs are on cereal boxes; they’re on children’s clothes” – and the nowhere – they’re dead – work on us: “The fact dinosaurs are extinct makes them ours.

“A dinosaur can’t object to our interpretation.

“They’re malleable – inaccessible but right next to us; a success and failure; scary and reassuring. The ambivalence is a real part of it. They bring together these concepts – mystery and reality with enough space in between to do what we like.

It’s not Dr Tattersdill’s only idea about what’s going on – broadly, he sees three interconnected strands – but it’s one that sees him get further than some; among them Michael Crichton, on whose novel Steven Spielberg based Jurassic Park – a film with a fourth sequel currently playing in cinemas.

Few people if any have done more than the late author to entrench dinosaurs’ cultural standing over the past 25 years, so little wonder he wanted to know the cause of their enduring popularity – particularly what was going on in our minds; the psychology of the fascination.

But in an essay in which he tried to figure it out, the man who had effectively been dinosaurs’ PR rep was left stumped. The dino don had nothing.

In fact, Crichton rejected more than he discovered. He did not, for instance, think it was a kid thing; finding the fascination to be permanent, free of fashion, and common in children and adults alike.

He was also sceptical of dinosaurs’ size being behind the appeal, discounting too any sense of morbid curiosity, sympathy, or natural history schadenfreude over their extinction. Small dinosaurs, he found, commanded as much interest as the large, with dinosaurs’ done days a tricky concept for kids who ask to see them at the zoo.

“So in the end,” he wrote, “I decided I just don’t understand it. And I don’t believe anybody does.”

Dr Tattersdill rejects the same concepts as Crichton, but still thinks he can shed some light on our love for here-and-not-here beasts – and it might be partly to do with those dual interests, science and literature, which at first sound an unlikely mix.

“They’re usually thought of as opposites,” he says, “but they’re useful for dinosaurs because you cannot have the idea of them without science and culture.”

Whereas Crichton considered science and helped make the culture, Dr Tattersdill considers both at once; the jawbone finds plus the writers; DNA and the filmmakers; extinction and the kids’ pyjamas. Jurassic Park’s author, he might say, did not think enough about his own work – or what we, as culture’s consumers, bring to the party.

From this position, he fans out to think more about our keenness.

He thinks about nostalgia. But it is a special kind; a turned-up-to-11 kind. Here, heady factors combine for a hurtle down memory lane that comes in not at a personal level, but a species-wide one.

“Dinosaurs mean a yearning for the past,” Dr Tattersdill says. “For the deep past of the Earth, but also one’s own childhood and finally, 19th Century history when dinosaurs became part of human culture.

“Dinosaurs let you experience both human culture and natural history. And that’s a very rich thing.”

Another factor is to do with the dash to museums for bones, rather than Loch Ness with its whispers of the living.

Nessie is a concept about which we can get giddy, but while open to theory, it fares worse for proof.

But the bonkers-sounding monsters roaming the Earth? That happened. This rare collision of the fantastic and fact, the crazy and the evidenced, is, Dr Tattersdill thinks, attractive to us.

And it is this in turn, he says, that feeds back into that ambivalence he’s spotted; the here-and-not-here; the mystery and reality, between which the lines for ownership are drawn.

It’s a situation, then, not just about the provable footprints but the mark we choose to let them leave on us; that while dinosaurs are facts, they also happen in heads – they are an idea; “purely imaginative”, Dr Tattersdill says, “and intensely scientific”.

Dinosaurs are at once really unreal and unbelievably true. And even though they once ruled the Earth, they belong to us with a roaring come-on of “I’ll be whatever you want me to be”.

Now, isn’t that something we can get our teeth into?