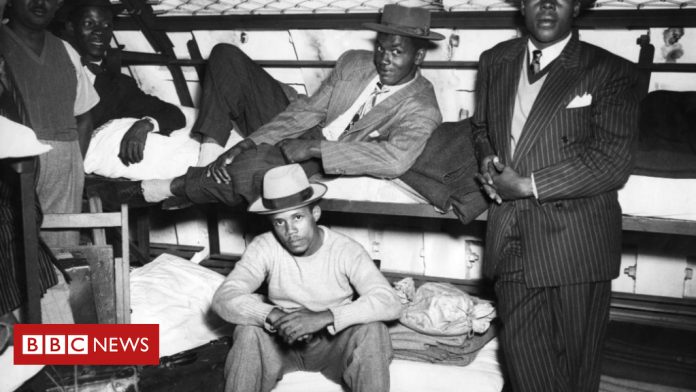 When Caribbean migrants stepped off MV Empire Windrush on 22 June 1948, many had nowhere to live. The lack of housing in London following World War Two meant even temporary accommodation was in short supply.

So 236 migrants from the merchant vessel were bussed from Tilbury docks in Essex to Clapham, where for two shillings and sixpence a week they got food and a bed in a shelter underneath Clapham South Tube station.

The underground passages had been fitted with bunk beds and washing facilities when they were used as civilian shelters during the war.

Life in the windowless underworld was basic, cramped and noisy. One Windrush resident described the accommodation as “primitive and unwelcoming, like a sparsely furnished rabbit’s warren”.

They tried to sleep as trains rattled overhead.

Now the London Transport Museum has opened up the deep-level site for tourists to explore on guided tours.

One of the subterranean suburbanites was John Richards, now 92. He lived underground for three weeks when he first arrived in London after the Windrush docked at Tilbury.

“The trains that ran overhead in the morning woke me up. There were beds all around with crisp white sheets.

“They had a tea cart at the station. We had pie in the evenings,” said Mr Richards, who soon moved into a hostel and found work with British Rail.

“I survived, because friends know friends. It was hard but in the long run you find a way.”

The tunnels of Clapham South are the deepest of the deep-level shelters, and sit beneath the Northern line. There are 180 steps down to reach it and there were enough beds for 8,000 people.

The shelter was never used to capacity – it opened to members of the public in 1944, after the worst of the Blitz.

Original 1940s signage remains on the walls, including directions to the toilets, canteen and sleeping areas.

Those seeking shelter were assigned to a specific section of Clapham South, each of which was named after a famous British admiral, including Collingwood, Drake and Jellicoe.

Within four weeks of arriving, all the Windrush migrants had secured jobs and moved out of the site.

One of the biggest employers was London Transport.

Many workers eventually settled in nearby Brixton, the site of the nearest labour exchange, beginning the area’s association with Caribbean culture.

The Windrush passengers were not the last to use the tunnels of Clapham South as somewhere to bunk down.

In 1951 the tunnels were open to thrifty visitors to the Festival of Britain who wanted somewhere cheap to stay in the capital as they viewed the new Festival Hall, the Skylon and Donald Campbell’s Bluebird.

The site was also used as a billet for troops lining the route for the funeral of George VI in 1952 and for Coronation visitors in 1953.

Tickets to see the underground shelters are now on sale from the London Transport Museum for tours starting on 11 August, running Wednesdays to Sundays.