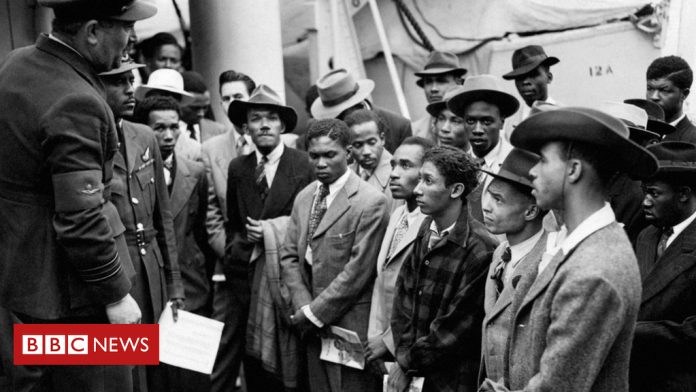 A thanksgiving service is being held later to mark the 70th anniversary of the arrival in the UK of Caribbean migrants on the Empire Windrush ship.

Prime Minister Theresa May, Labour leader Jeremy Corbyn and families of the Windrush generation will attend the event at Westminster Abbey.

The migrants were among the first to be recruited to rebuild post-war Britain.

But there continues to be concern over the scandal, which saw some of the generation wrongly face deportation.

Nearly 500 Caribbean migrants from countries including Jamaica, Bermuda and Trinidad exited the Windrush on the 22 June 1948 when it docked at Tilbury in Essex.

They had applied to job adverts after World War Two with the hope of finding long-term employment in the UK, having gained a type of citizenship under the British Nationality Act of 1948.

The Westminster Abbey service will commemorate the contribution the migrants and their families have made to the UK.

Meanwhile, a celebration of Caribbean culture will be held at Tilbury Docks to mark the anniversary.

The government has also announced Baroness Floella Benjamin is to lead a commemoration committee overseeing the creation of a “fitting legacy” to the Windrush generation.

A statue celebrating their achievements is among the ideas for the permanent tribute.

Baroness Benjamin, a former children’s television presenter and Lib Dem peer, was born in Trinidad but emigrated to the UK with her family in 1960.

She said: “This a significant step in recognising the contribution made to Britain by Caribbean people and this committee will make sure the work and sacrifices of the Windrush pioneers will live on in the hearts and minds of future generations.”

The right to remain in the UK for Commonwealth migrants who arrived before 1973 was supposed to be legally guaranteed.

But it emerged this year that some migrants from the Windrush generation – many of them who arrived as children – had faced deportation.

They were being refused healthcare and access to jobs because they did not have the paperwork to prove their status following a tightening of immigration rules in 2014.

The government has since apologised for the crisis and says a dedicated taskforce has now provided documentation to over 2,000 people demonstrating their right to live in the UK.

Earlier this week, the government announced an annual Windrush Day would take place.