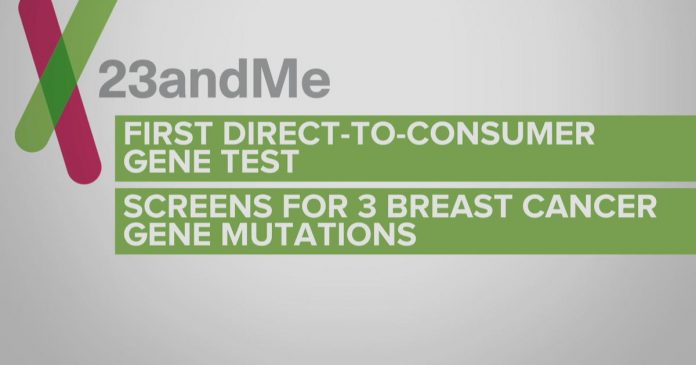 Earlier this month, the FDA approved the first direct-to-consumer test in the U.S. that’s designed to find three gene mutations linked to breast cancer without a doctor’s prescription. It’s the latest in a growing number of cheaper and easier genetic tests that can reveal information about your ancestors, risks for certain diseases, or even why you’re sensitive to bitter tastes.

CBS News medical contributor Dr. David Agus joined “CBS This Morning” to discuss the pros and cons of the cheaper and easier genetic tests, some of which cost less than $100.

“There are other at-home tests that require a doctor to sign off on it, but you can do it at home – you spit into a tube, you send it in – that could look for all the mutations in the BRCA1 and BRCA2 gene which is risk for breast and ovarian cancer. Remember, when Angelina Jolie heroically announced ‘I have this gene’ five years ago, it was $4,000 for the test. Now it’s been democratized for less than $100,” he said.

But it’s important to note that the newly approved test from 23andMe only covers three of more than 1,000 mutations linked to breast and ovarian cancer. Agus said he worries people who test negative for those three mutations will wrongly assume that they’re not at risk at all.

While these tests provide some useful knowledge, he recommends that anyone considering at-home genetic testing involve a doctor who can help interpret the results.

“This is serious stuff and I want to make sure you really understand as the consumer what’s going on, because big decisions have to be made in either direction,” he said.

Using his own experience as an example, Agus explained why it’s important for people to keep in mind that genetic test results are not “binary.”

“I took [a] test myself. My results were on the front page of The Wall Street Journal and I was higher risk for heart disease. It didn’t mean I was going to get it, it’s just the national risk factor was 38 percent for a male my age. I was in the high 40s. I mean, it changed what I did and I really paid attention, but it’s not a yes/no answer. So you really need somebody who understands it to explain it.”

Despite his concerns, Agus maintains that these tests can provide more knowledge and, ultimately, “knowledge is power.”