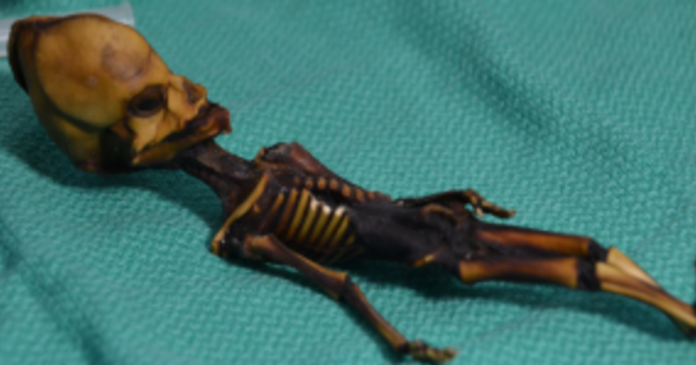 Puzzling skeletal remains found in Chile 15 years ago — and rumored to be “alien” — are, in fact, from a human fetus with rare bone anomalies, researchers say.

The findings may or may not put to rest any internet-driven alien theories.

But the researchers said their discoveries could potentially aid in diagnosing rare bone disorders. They were able to identify several previously unknown genetic mutations behind the fetus’s bone abnormalities.

“DNA differences like this are useful to help us diagnose children and adults with ‘undiagnosed’ disorders,” said Dr. Atul Butte, one of the researchers on the work.

“More and more children’s hospitals are able to study patients and better understand what differences in their DNA might be leading to their conditions or disorders,” explained Butte, a professor at the University of California, San Francisco.

“And the ones we learned here can get added to the catalogues for future reference,” he said.

The story goes back to 2003, when scientists discovered a mysterious mummified skeleton in Chile’s Atacama Desert.

Nicknamed “Ata,” the skeleton stood just 6 inches tall, with a cone-shaped head and slanted eye sockets, and 10 pairs of ribs — versus the normal 12 in humans. Beyond that, despite the skeleton’s tiny size, it had the bone composition of a 6-year-old.

The unusual array of features triggered online rumors of an alien discovery.

And Ata does seem unique — but definitely earthly, according to the new analysis.

The skeleton was most likely a fetus, the researchers noted, and it had severe mutations in seven genes that regulate bone development.

Many of the mutations were already known, and related to disorders like dwarfism and various bone deformities and facial malformations. But several mutations have never been recognized, Butte and his colleagues reported.

Some of Ata’s individual anomalies have been seen before, Butte said, such as the abnormal number of ribs and short stature.

“It’s just that this particular girl seemed to have many of these anomalies at the same time, and of a more severe nature,” he explained.

The findings were published online March 22 in Genome Research.

The researchers made their discoveries after extracting a small amount of DNA from Ata’s ribs and analyzing the entire genome — the complete set of genetic material.

Almost all of Ata’s DNA was “matchable” to human DNA, said Garry Nolan, a researcher at Stanford University who also worked on the study.

There is a simple explanation for the small amount that wasn’t pinpointed as human, Nolan said in a Stanford news release: The sample was simply too degraded.

And while the skeleton was once hypothesized to be ancient, it is actually about 40 years old, the findings showed.

Even though Ata was discovered 15 years ago, it’s only in recent years that this kind of genome analysis — done on the researchers’ own time — has become feasible, Butte said.

“Every year the cost to sequence genomes continues to drop, with the current price around $1,000,” he said. “At a certain point, the price and availability of sequencing reached the right amount, making it possible to sequence the Ata mummy genome.”

According to Butte, there is a wider lesson to learn from Ata’s genome analysis.

“Sometimes there might actually be more than one major DNA difference involved in explaining a particularly hard-to-explain patient,” Butte said. “We shouldn’t stop a search when we’ve found the first relevant mutation. Indeed, there might be many others also involved.”

Getting such a “full explanation” will become increasingly important, Butte added, as researchers develop gene therapies aimed at correcting some of these rare disorders.