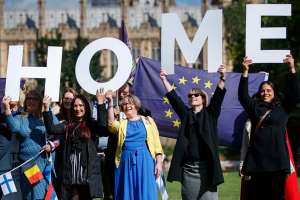 © Getty
The government has faced criticism over its treatment of EU citizens living in the UK since the Brexit vote.


The government has promised to fast-track the registration process for EU citizens who want to stay in the UK after Brexit, with decisions on applications to remain in the country reduced from six months to “a matter of days”.

Unveiling details of the “settlement scheme” for EU citizens, the Home Office promised that the application process would be “short, simple and user friendly” with a default position of accepting rather than rejecting applications.

Sajid Javid, the home secretary, said: “With the scheme, we’re meeting our commitment to secure the rights of EU citizens who are already in this country, contributing in so many ways, they’re working, they’re studying, or for other reasons.

“We want them to stay and we want to make that process of staying as easy as possible.”

The scheme will open on a phased basis later this year and applications can be made online or via android mobile phones but not iPhones, according to a 57 page “statement of intent” document published by the Home Office on Thursday.

Applications will cost £65 per adult, with children half price. EU citizens will be issued with an ID number, but not a physical card, which they will be required to use for public services, such as the NHS and possibly employment and property rental checks.

Having faced steady criticism in the past 18 months over its treatment of EU citizens, the Home Office is promising to offer “human” contact for anyone who needs help. Caseworkers will be based in libraries and home visits will be offered to people who are housebound or in residential care.

Carers, stay-at-home parents, retired people and students are eligible for settled status with no proof of income. Irish citizens will not have to apply but will have to provide proof of residency if they have non-EU spouses who want to remain in the UK.

It has been estimated that the Home Office will have to process up to 4,500 applications a day to get through 3.2m applications before the programme closes in June 2021. However, numbers could be even higher, with the Home Office saying there could be anything from “3.2m to 3.8m” EU citizens eligible for the scheme.

Applicants will be asked to submit their passport or ID cards along with a passport or digital photograph and the Home Office will then automatically check Revenue and Customs (HMRC), and Department for Work and Pensions (DWP) records for proof they have been living in the UK.

Sources said the tax and benefits records were not a surveillance operation but “a proxy for proof of residence”.

Anyone with a criminal record involving a jail sentence of more than 12 months is likely to be rejected, although checks on past crimes in the UK or the rest of Europe will not be automatic.

If EU citizens do not wish to apply using their national insurance number and tax records, the Home Office will accept other proof of residence, including council tax bills, rental or mortgage statements, and utility bills.

“Our default position will be to grant status,” Javid told the Lords EU justice sub-committee. “We will be looking to grant status as quickly as we can. We will not be looking for excuses at all to not grant status. It will be driven by default view, you provide this information, if you’re not going to be granted status there will have to be a very serious reason.”

He said the Home Office would do everything to prevent another scandal like that around Windrush generation people.

“A number of mistakes were made,” he said. “There were clearly people from the Windrush generation that were badly treated. We want to make sure we learn all the lessons from that.”

The Home Office, condemned for taking six months to process applications for permanent residency, said it believed the system was now so automated with the HMRC and DWP checks that ID numbers would be issued “in a matter of days”.

One of the main groups campaigning for the rights of EU citizens, the3million, urged the Home Office to think again about charging people.

“If the government is really committed, it should remove all barriers including fees,” the founder, Nicolas Hatton, said.

“Today’s statement will give hope to many EU citizens, but questions remain whether the Home Office will have the capacity to change the hostile environment culture to a welcoming approach.”

It will be opening a contact centre with 1,500 staff, including caseworkers proactively making calls to people.

“We will work with applicants to help them avoid any errors or omissions,” the Home Office said.

The scheme will be launched in the late summer with specially selected test groups,and the system will be rolled out in the following months, becoming fully operational by 30 March next year.

It will remain open for two a half years, with EU citizens who arrive in the country eligible to apply right up until the end of December 2019, the proposed end of the transition period.

The new status will also be considered a route to British citizenship, ending the need for EU citizens presently in the country to go through the permanent residency process.

Close family members, defined as “spouse, civil partner, durable partner, dependent child or grandchild or dependent parent or grandparent living overseas” will be allowed to join those with settled status under a “lifetime right” of EU citizens already in the country.