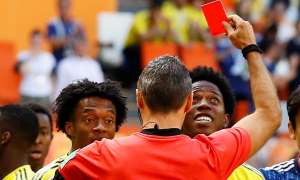 © Reuters
Carlos Sánchez (right) is sent off in Colombia’s defeat against Japan.


Police in Colombia have launched an investigation into a series of online death threats made against midfielder Carlos Sánchez who was sent off only three minutes into his country’s opening World Cup game.

In a chilling reminder of the murder of former Colombia defender Andrés Escobar who was gunned down just days after scoring an unfortunate own goal at the World Cup in 1994 years ago, several social media users have targeted the ex-Aston Villa player with vile messages threatening his life.

The midfielder, described as “one of Colombia’s most important players” by the manager, José Pékerman, struck out a hand to block Shinji Kagawa’s effort on the line and earn the second fastest red card in World Cup history. Kagawa rolled Japan’s resulting penalty past David Ospina in a nightmare start to Colombia’s World Cup campaign.

The extra Japanese player ultimately proved crucial as the Blue Samurai went on to record a shock 2-1 win against the group favourites.

However, as more than 25,000 Colombian disappointed fans left the Mordovia Arena in Saransk, one Twitter user posted a picture of Sánchez aligned with a photograph of Escobar and the message: “I propose a dream.” 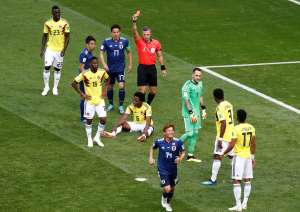 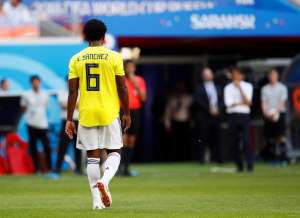 
Amid the thousands of tweets repudiating the disgusting threat, other tweets followed from users supporting the idea. “If Andrés Escobar was killed for scoring an own goal, then Carlos Sánchez should be murdered and his dead body pissed on,” read one of the replies.

The World Cup Fiver: sign up and get our daily football email.

Colombian radio station Blu Radio have now confirmed that the judicial arm of the Colombian police (Dijin) have assigned a special cyber-crime team to investigate the matter. The news comes almost 24 years to the day that Escobar deflected a cross into his own goal against the United States at the 1994 World Cup.

Colombia face Poland in Kazan on Sunday in a must-win tie for both countries. Sánchez, who has 80 caps for his country, will miss the game after picking up a one-match ban. 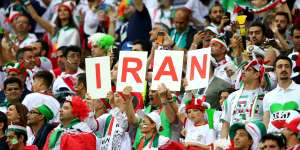