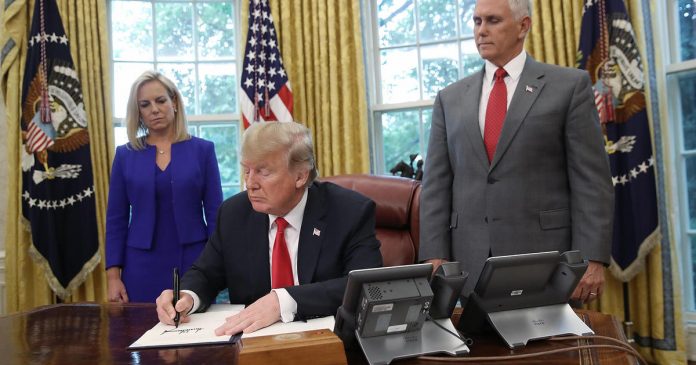 President Trump signed an executive order regarding the administration’s “zero tolerance” immigration policy amid nationwide outcry for the White House to roll back the practice of family separation at the U.S. border. Signing the order in the Oval Office, Mr. Trump told reporters in the room that the administration would still continue its “zero tolerance” policy while managing to solve the issue of family separation.

“We are keeping families together and this will solve that problem. At the time we are keeping a very powerful border and it continues to be a zero tolerance, we have zero tolerance for people that enter our country illegally,” Mr. Trump said.

He added, “I didn’t like sight or the feeling of families being separated it’s a problem that’s gone on for many years, too many administrations.” He said that no one has had the “political courage” to take care of the issue which he claims has gone on for over 60 years.

‘ Paula Reid reports that order is not expected to reverse the policy on prosecuting all illegal border crossings, but it is expected to allow families to be held together during the process of prosecution and deportation. Justice Department officials have been working on the executive action all day — including Attorney General Jeff Sessions.

The order adds, “It is unfortunate that Congress’s failure to act and court orders have put the Administration in the position of separating alien families to effectively enforce the law.”

“You’re going to have a lot of happy people,” the president remarked as he signed the order. He noted that the administration would still be working with congress to find a legislative fix to the immigration problem.

Mr. Trump told reporters that his daughter Ivanka and first lady Melania Trump both felt strongly about images of young children separated from their families at the border, saying “anybody with heart would feel strongly about it.”

‘ Ed O’Keefe reports that the president’s decision caught members of Congress off guard. At least two senior aides say GOP leadership had no formal notice from the White House that he planned an executive action. As for the reason why the president decided to reverse course on the policy —  “The pressure is everywhere,” one senior GOP aide tells O’Keefe. “The TV is pressure. Bill O’Reilly said this is awful.”

O’Reilly — a friend of the president and someone Mr. Trump used to watch regularly on Fox News — has tweeted his concerns about the policy in recent days.

The senior aide also said that the public comments by senior Republicans like Sen. Orrin Hatch, R-Utah, — usually a reliable Trump ally — also likely played a role. Hatch and 12 other GOP senators — including John McCain, R-Arizona, and Lamar Alexander, R-Tennessee, — co-signed a letter on Tuesday to the Justice Department asking that the administration pause the separation of families until Congress addresses the issue.