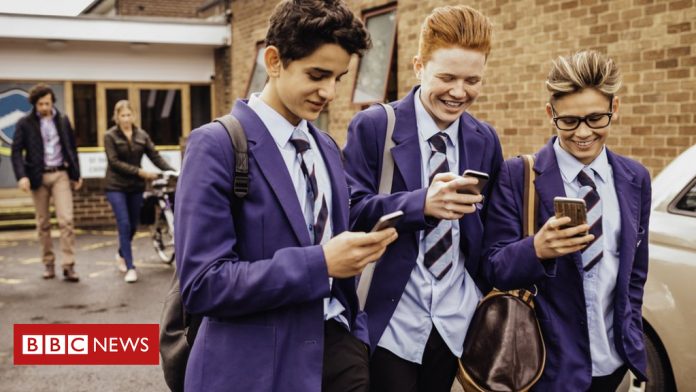 Schools should ban mobile phones from the classroom, the culture secretary has said.

Matt Hancock, writing in the Telegraph, said he admired schools who did not allow them, adding that more heads should “follow their lead”.

In a letter to the same paper, a group of Conservative MPs said mobiles should be confiscated at the school gates.

At the moment, schools are free to set their own rules. So what are the options?

Michaela Community School in Wembley has implemented a blanket ban – if a phone is seen or heard, it will be confiscated.

Head teacher Katharine Birbalsingh says: “We believe strongly that children should not have phones in school.

However, they don’t actually ban them from the premises, as some parents want to be able to contact their children after school.

“If they had one in their bag, but if we never see them or hear them, then you don’t have any problems.

“We rarely see a phone. No child would ever deliberately take their phone out here.

“They know the expectation and they agree with it. They like the fact they have freedom from the world of social media.”

It is a similar policy at Reepham High School and College in Norfolk. In September, it introduced a ban on phones – although they are allowed to be hidden away in school bags.

Head teacher Timothy Gibbs told 5 Live: “The reason we wanted to ban them originally is there were lots of little things going on in school during the day that we didn’t like – some in lessons, and some out of lessons.

“So now at school, we have less incidents of little things like a phone vibrating during a lesson which disturbs the flow of the lesson.”

Mr Gibbs added: “We don’t find students now at lunchtime standing in groups, looking at screens, not really interacting with each other.

“We actually find there has been a decline in bullying between students during school hours.”

However, the school does allow them to be used in the classroom if “under explicit instruction by a teacher”.

According to the Department for Education, 95% of schools in England control the use of phones in some way.

Thomas Tallis School, a comprehensive in Greenwich, south-east London, allows pupils to use their phones during breaks.

Head teacher Carolyn Roberts says: “We believe that one of the things you do in schools is give children the skills for adult life – and one of the things adults have to know is how to manage and moderate their mobile phone use.

“Our policy is that mobile phones are allowed until they become a nuisance and then if they get in the way of learning we confiscate them.”

Ms Roberts also questions how feasible a total ban would be.

“To prevent any mobile phone coming into the building we would have to search every single one of them every single day.”

What are others saying?

A 2015 study by the London School of Economics found that banning phones had the effect of giving pupils an extra week’s education over the course of an academic year.

Researchers looked at schools in four English cities and found test scores increased by more than 6% in those which banned phones.

A Department for Education spokesperson said: “Head teachers already, of course, have the power to ban mobile phones in schools and we support their right to do so.”

Last week the headmaster of Eton, Simon Henderson, said schools and parents should not be scared to take smartphones away from teenagers.

But Jill Hodges, the founder of Fire Tech, which runs technology courses aimed at nine to 17-year-olds, says phones can also be good educational tools.

“There are tonnes of schools that we see where kids are using technology in good ways,” she says.

“They’re being creative, they’re able to collaborate and communicate and share ideas they have.”

Paul Howard-Jones, a professor of neuroscience and education at the University of Bristol, says schools have an important role in helping pupils learn when to use their phones.

He says: “If school and education is about preparing us for that world, then learning how to use your mobile phone – when it’s appropriate, when it’s not appropriate, is a very important part of that.

“Children need to learn to self-regulate. They’re not being given the opportunity to do that if their phones are taken away at the start of the day.”

The UK is not the only country debating the issue. French President Emmanuel Macron included a pledge to enforce a ban at schools during his campaign.

It is due to come into force in September. Critics, however, have called it a publicity stunt.