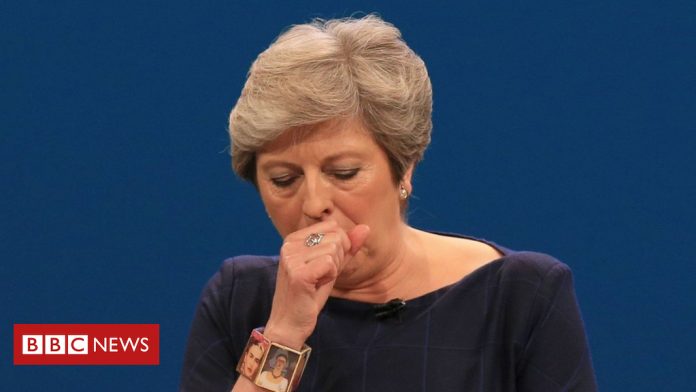 Autumn sees Britain’s political parties gathering by the sea – or in big city conference centres – here’s a round-up of this year’s.

The most memorable moments of the 2017 Conservative conference came at the very end, in a speech more eventful than Theresa May and her team could have imagined.

The prime minister was plagued by a cough which left her relying on gulps of water – and even a cough sweet handed to her by the chancellor – to complete some lines.

If that wasn’t bad enough, prankster Simon Brodkin had somehow gained access to the conference floor and handed her a mocked-up P45.

“I was about to talk about somebody I’d like to give a P45 to, and that’s Jeremy Corbyn,” the PM quipped, to cheers from the party faithful.

It didn’t end there – some of the letters fell off the conference stage backdrop behind her, leaving it as: “Building a country that works or everyon.”

The speech had been billed as the PM’s attempt to reassert her authority after the ill-fated snap general election and reports of splits in her cabinet over Brexit.

It also contained policy pledges on social housing and a cap on standard tariff energy bills, while Home Secretary Amber Rudd announced a ban on acid sales to under 18s and a tightening of the laws on viewing terrorist content online.

In his speech, Foreign Secretary Boris Johnson – who has been accused of undermining the PM with his interventions on Brexit strategy – said it was time to “let the British lion roar”.

Mrs May ended the conference being publicly supported by her MPs and ministers although there were reports of “emerging plots” among some MPs.

Jeremy Corbyn ended Labour’s week in Brighton with a speech to delegates in which he claimed the party was “on the threshold of power”.

The centre ground of British politics had shifted, he argued, and his Labour Party was now in the “political mainstream” because its polices were “what most people in our country actually want”.

He used the speech to announce some new policies – such as rent controls and curbs on gentrification – but it was mainly a chance to rally the troops for another election campaign, with the Tory government “hanging by a thread”.

His supporters in the hall loved it, although they were chanting “Oh, Jeremy Corbyn” for a full two minutes before he had even begun.

There was a row about Brexit, with moderate MPs, who want Mr Corbyn to commit to keeping the UK in the single market and customs union, feeling they had been denied a vote on this issue and the chance to debate it more fully.

And Shadow Chancellor John McDonnell caused a stir when he warned Labour must prepare for all eventualities in government, including a possible run on the pound.

But delegates approved changes to the way leaders are elected, which could make it easier to elect a left-wing successor to Mr Corbyn.

SNP leader Nicola Sturgeon insisted her party will “always make the case for independence” as she used her keynote speech to focus on domestic priorities rather than constitutional matters.

Although the Scottish government has delayed plans for a second independence referendum, Ms Sturgeon said her party still had a mandate for a vote on the issue.

The “essence of independence”, she told activists, was being “in the driving seat and not simply at the mercy of events” as she stressed the case for leaving the UK did not merely hinge on Brexit.

Her headline policy announcement was a plan to set up a publicly-owned, not-for-profit energy company by 2021.

She argued the venture would give people – particularly on low incomes – more choice of which supplier to use with energy sold at “close to cost price as possible”.

Spending on early-years childcare in Scotland will be doubled to £840m by 2020, a move the SNP said would be “truly transformational”, while there will be a new scheme to provide free sanitary products in schools, colleges and universities from next August.

The Liberal Democrats gathered by the seaside having modestly increased their tally of MPs to 12 in the recent general election, following an electoral drubbing in 2015 that left them with just eight.

In his keynote speech to conference, new leader Sir Vince Cable said he could lead the Lib Dems back to power by offering a mix of “hope and realism”.

And he claimed Brexit would be an act of “masochism”, leaving the UK poorer.

UKIP members met for a two-day conference in which new leader Henry Bolton was crowned.

The former soldier, who saw off challenges from better-known candidates, told members: “Brexit is our core task. However it is not the end of the line.”

Controversial anti-Islam candidate Anne Marie Waters finished second. Some MEPs had threatened to quit if she had won.

UKIP’s share of the vote in the general election collapsed to just 1.8%, prompting the resignation of then-leader Paul Nuttall.

Green Party co-leader Jonathan Bartley spoke of the “hurt” he and others felt at the party’s loss of ground in June’s election, where its vote share more than halved.

While the Greens had suffered at the hands of the two-party system in England and Wales, he said it could be proud of the causes it had espoused and the influence it had had on debates around austerity and fracking.

Through its national and local representation, he said the party would stick up for the “little guy” as it made the case for far-reaching economic change.

He called for more public input into the funding of services, locally controlled energy schemes and bank investment in “community bonds”.

Leanne Wood vowed to stay on as leader of Plaid Cymru at the party’s conference. She told the conference they needed to earn the trust of non-Plaid Cymru voters whilst announcing the party could back a second Brexit referendum if there was no deal with the EU by March 2019.

Ms Wood also announced proposals to re-train manual workers whose jobs are threatened by automation and promised a “rail revolution”.

The party saw a drop in their share of the vote in June’s general election, although they gained a seat.

Meanwhile Plaid Cymru AM Neil McEvoy, who was suspended from the party following a row over policy on council house sales, dismissed suggestions he was planning a leadership challenge at a fringe meeting.