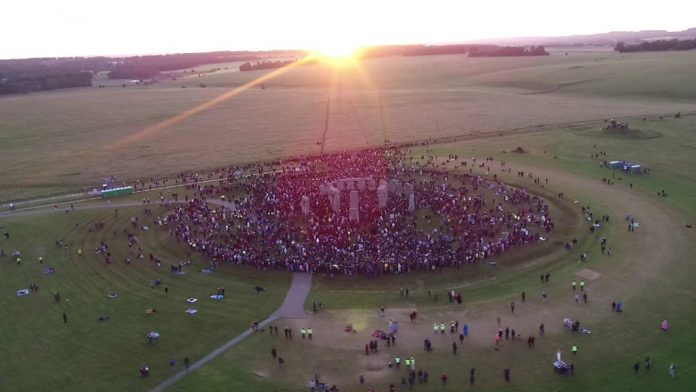 Thousands of people gathered at Stonehenge for the summer solstice, as the sun rose amid clear skies.

About 9,500 people were at the Neolithic monument to greet the start of the longest day of the year, according to Wiltshire Police.

The sun appeared behind the Heel Stone at 04:52 BST to cheering and applause from the crowd.

The summer solstice is one of the rare occasions that English Heritage opens up the stones for public access.

As with last year’s event, Wiltshire Police confirmed it had stepped up security with armed police on patrol.

Although thousands attended the solstice, the force said 3,500 fewer people came to watch the sunrise compared with 2017.

Supt Dave Minty, Wiltshire Police’s overnight commander, said behaviour at the stones was “brilliant”, with no arrests made.

“The sunrise was amazing, and we don’t see many of those,” he added.

“People seem to have adapted really well to the heightened level of security and they’ve been really patient with it.”

English Heritage’s director of Stonehenge, Kate Davies, said the solstice was one of the “highlights of the year”.

“It’s a great opportunity for friends and families to come together and mark the longest day of the year, as people have done for thousands of years,” she said.

“There was a lovely, friendly atmosphere throughout, the sun shone, and dawn was met with loud cheers.”

On the summer solstice, the sun rises behind the Heel Stone, the ancient entrance to the stone circle, and sunlight is channelled into the centre of the monument.

It is believed that solstices have been celebrated at Stonehenge for thousands of years.

The site holds special significance for members of the Druid and Pagan community, who perform rituals and celebrations at the summer and winter solstices.

Hundreds of people also enjoyed the solstice at the nearby Avebury stone circle, where Wiltshire Police Chief Constable Kier Pritchard described it as a “lovely family event” with a “positive spirit”.