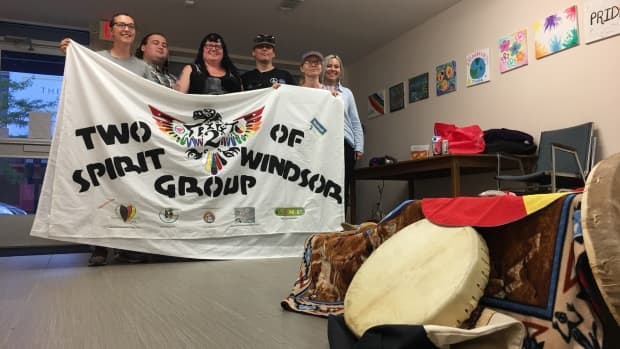 The Two Spirit Group of Windsor has been around for about five years, but a permanent meeting space offered by the Windsor-Essex PrideFest has led to a re-launch at a time when organizers believe it’s needed most.

People of all backgrounds and identities are invited to the meetings, which started up again in April and focus on sharing in an open circle.

CBC Reporter Chris Ensing was invited to a recent circle on a Wednesday evening and spoke with some of the people involved.

Here is what they have to say about having the group available to them in Windsor-Essex. 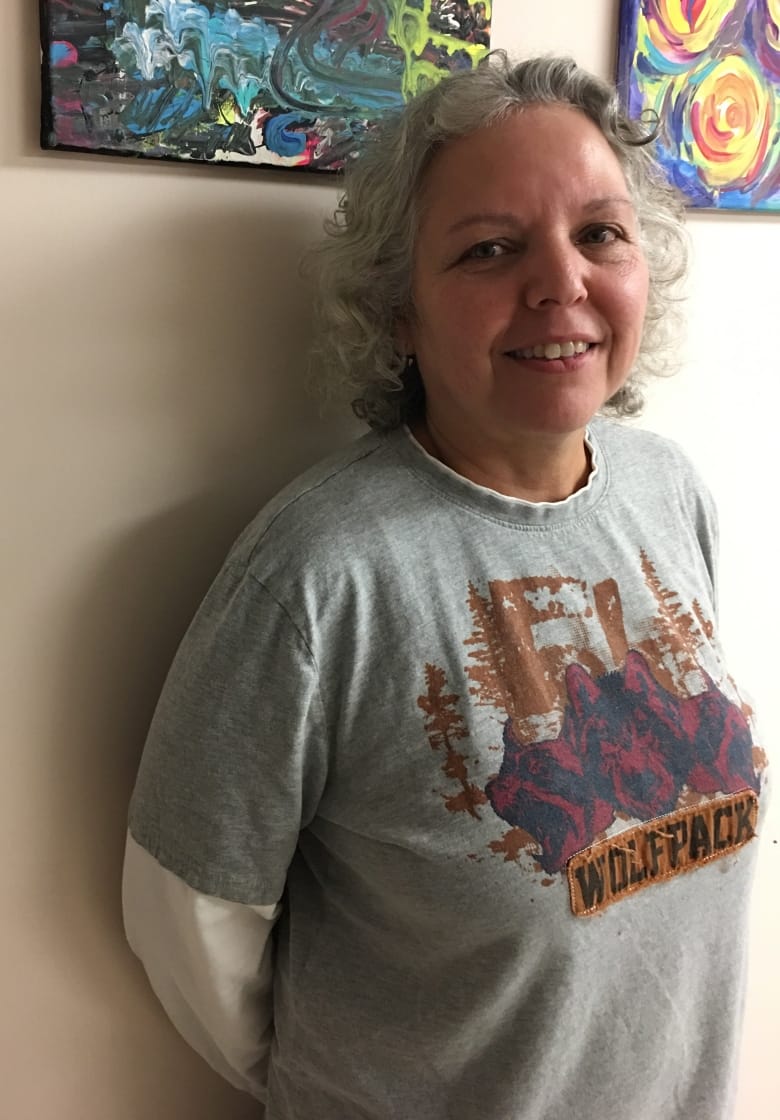 Conni Ma’iingan is a two-spirit Ojibway who started the Two Spirit Group of Windsor about five years ago. (Chris Ensing/CBC)

On the what two-spirit means: “Two-spirit, if I was going to sum it up, is when we house two contrasting spirits. Some would say male or female. I had a friend who is a single mother and she felt like she was two-spirited because she was a mother and father to her children. So I think it’s just so open. There’s no one way to be two-spirited and there’s no one definition because everyone experiences it differently.”

Growing up two-spirit: “Life was very different. I couldn’t be in a closet, I never understood that. It separated my from my family, my family did disown me for a few years. The world was very violent out there. I always felt it was a choice for me. I chose to live it. I’m two-spirited. The climate was different and it’s getting better and better all the time.”

On the power of the circle: “When you open that circle up and we have the talking stick or the feather you’ll find like you saw tonight that people are going through hard times. So once a week they come in, they get to check in, and they’re not really prepared. They get very emotional because it’s the first time they get their voice out there. That someone is actually sitting and listening to what they have to say. And I think that’s where the emotions come from because for the first time this week someone is saying ‘How are you today?’ and they’re actually telling us a story.”

Why the group is open to none-Indigenous people: “It’s a part of our teachings. Our prophecy is that the four colours come together and share their teachings. We’re going to teach about the blended nations from the medicine wheel and I think it’s very important that we know we’re all from the same, we’re all connected, we all belong in the sacred hoop. That’s how we learn.”

Why this group works: “Before everybody gets here what we do is we actually smudge this whole place. We smudge all of our food, we smudge our cameras, we smudge everything that is here. So all that does is create positive energy, getting rid of all the negative. Everyone in the circle typically smudges. This week we decided to put it over there so nobody felt obligated or awkward… and I think the talking stick teaches people that here’s your moment. Here’s your time for your voice. The feather hasn’t come out yet. And when it does it’s a very, very emotional time. The eagle feather is very strong.” 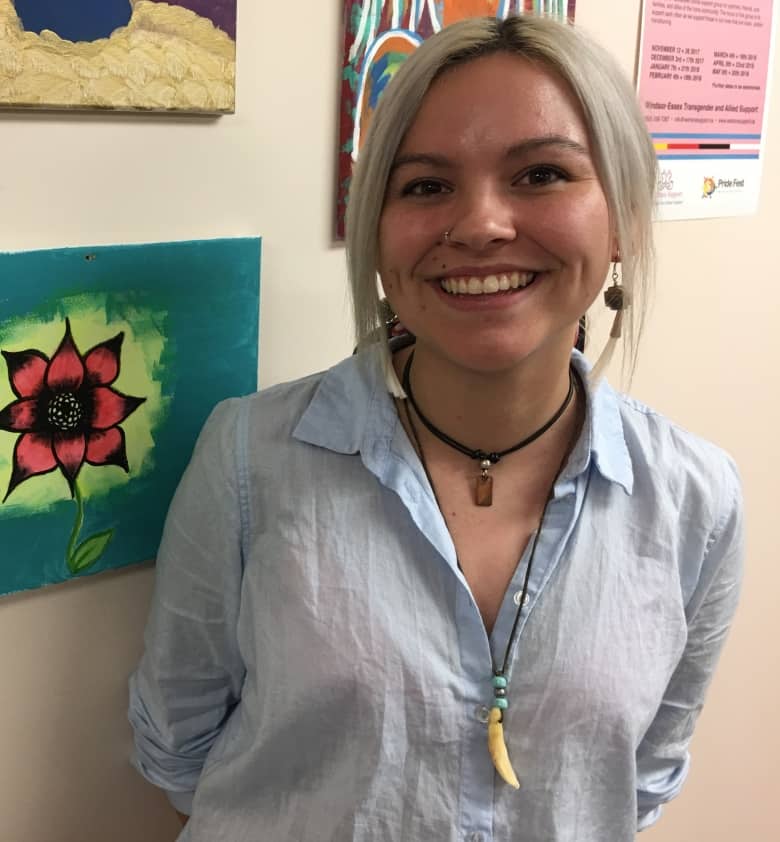 Sierra is a two-spirit bi-sexual Anishinabe who attends the Two Spirit Group of Windsor. (Chris Ensing/CBC)

On Wednesday’s circle: “I feel really good. I love coming to this group. I felt really lost for a long time and then when my Auntie and I decided to start this group it was like ‘Oh my gosh, this is awesome.’ I feel so apart of this and everyone here is absolutely amazing. And I feel so comfortable because I’m super, super shy but it’s just a great opportunity and tonight I feel awesome.

On when she felt lost: “I wasn’t very into my native roots and then I read something about a two-spirit person and that’s what I mostly identify as. My sexuality is bisexual but as a person I’m two-spirit and I asked my Auntie about it and she told me and it just clicked, like ‘Sierra this is what you are!’ But it’s really hard to explain it to people. When people think of two-spirit they think of your sexuality but it’s not that, it’s just an umbrella term that anybody could identify as that. To me, that’s my definition.”

On coming out: “I knew I was bisexual for a very long time I just didn’t accept it because I just wasn’t ready to do that. And then my one friend she really opened me up to it and I was really ready. But I was so scared, it was really nerve-wracking. When I told my best friend, that’s who I was most scared of, but she was totally like ‘oh that’s okay, good for you!’ But it is hard with some family members because they’re super catholic, they still haven’t grasped it — it’s still like ‘a phase.’ But it’s just who I am. It was hard but it’s getting better every day.

How a group like this would have helped: “It would have meant the world to me. I lived out in Essex and we really didn’t have anything like this out there. So it was really hard. I didn’t feel like I had anybody. But if I had a group like this I feel like it would have been so much easier for me to come out. Or not even come out, just accept who I was. I think this group is so important for people like that.”

On the power of the circle: “With our circles they’re really sacred and it doesn’t leave and I feel super safe when I’m with these people in a circle. With the talking stick — I hate talking — but when I grab the talking stick or the eagle it just spews out, I don’t know what I’m going to say. It just comes out and it’s such an amazing feeling. Trusting these people? It feels really, really good.” 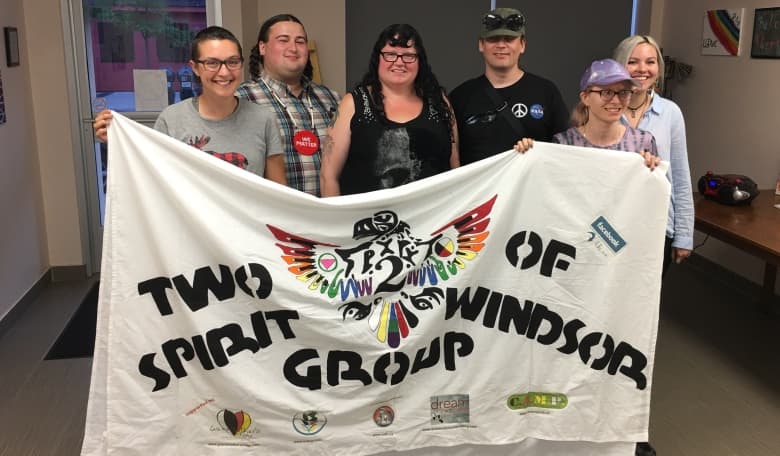 Kai Hadden, left, is non-binary and attends the group to learn more about what it means to be two-spirit. (Chris Ensing/CBC)

On their first impressions: “I was a bit nervous as I usually am for groups but when I walked through the door I felt relieved right away. It’s a very positive atmosphere for learning and I feel like I can ask questions and be myself.”

On learning about two-spirit: “I had heard about it in textbook terms and I was in a social work elective class and I heard a bit about it. I felt that I was uneducated and it was something that I needed to learn about it so when the group came up I figured the best way to learn would be through other people’s experiences and that’s why I showed up.

Attending as non-Indigenous: “It’s been really positive and the environment is set-up for people that are allies to learn and that I can be comfortable here. It’s very exciting. We have drums and we’ve done a few songs and what-not. I really like that in this group you can do things at the same time — we’re not just sitting around talking. We’re singing, or we’re doing a craft and I find that there’s a wide enough range that if you’re not comfortable talking than you can excel at other parts of the group.

On building trust: “There’s a balance. In the same hour we’re talking about serious concerns and then we jump to joking around about Starbucks. It’s great. And I feel that if there wasn’t that balance there it would be very overwhelming. And maybe some people fear that it’s too much at once. We go at a slow pace, we learn something different each week. It’s very well paced.