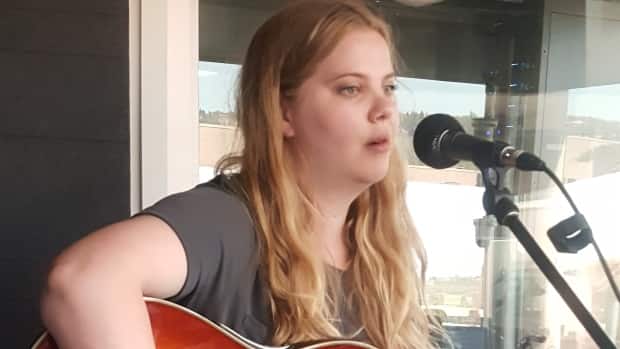 Samantha Savage Smith went away for a while, at least creatively.

Savage Smith joined CBC host Doug Dirks in the studios for a conversation — and performed a new song — on The Homestretch Wednesday, where she talked about her latest creative leaps, a few of which coincide with the 2018 Sled Island Music and Art Festival, which officially kicked off Wednesday night at 35 venues across Calgary.

Tuesday, Savage Smith played a unique gig at an event called Video Kills, where she and drummer Chris Dadge played a live musical score to a short film about a Palestinian woman.

She’s feeling as if her batteries have been creatively re-charged, since she burned out following the relentless touring to support her 2015 album Fine Lines.

After a year spent touring across the UK and Europe with west coast band Lab Coast, Savage Smith has rediscovered her muse.

“Especially this year — the start of this year and end of winter last year — I just started writing songs again,” she said.

The new songs have a new focus, as well.

“My main goal for the new songs is I really wanted to focus on groove and tempo,” she said. “I write all my songs on guitar, so that’s always going to be the main thing.

“But I also — it’s kind of an ongoing theme — I have a lot of percussion in all the songs. In my live band, I have a conga player, which I’m [also] pretty excited about.”

Smith will perform at Sled Island, which takes over 35 city venues with 250 bands, art, film and comedy in Calgary. 3:22

Savage Smith has a release date in mind for her next album, but it’s still a ways away.

“My goal is to have it ready and released for spring next year — so we’ve got a whole year to wait,” she said.

“I’m trying to learn from past releases and maybe past mistakes — and actually give myself time, and a lot of planning.”

The tour with Lab Coast through Europe and the UK was a reminder for Savage Smith that Europeans really know how to treat touring artists.

“They treat artists and bands much better over there.They take care of you. They feed you!” she said.

“They give you apartments attached to the venues. They have a lot of arts funding for live music venues in different countries in Europe. It is very civilized.”

“All the towns are so close together, so you can drive two hours and be where you have to be, and you can actually see the sights a little bit, whereas in Canada, you drive 10 hours a day venue to venue — [so there’s] not much to do [except perform your gig].”

Savage Smith has one formal gig remaining for Sled Island — a Saturday Beat Route hangover brunch gig at the Palomino, that starts at 1:30 pm.

But there have already been a couple gigs, and she loves what the arts and music festival does to the vibe of the city.

“Some years are chiller than others, but I feel like this is [a] very common [experience] for Calgary bands and musicians,” she said.

“Even my band, they have their own shows and everyone’s super busy running around [during Sled Island].

“You kind of get to experience the city in a different way. There’s life on the streets — a lot of energy,” she said.

“If you’re a music lover, it’s just awesome to hop around venue to venue and see bands that you enjoy.”