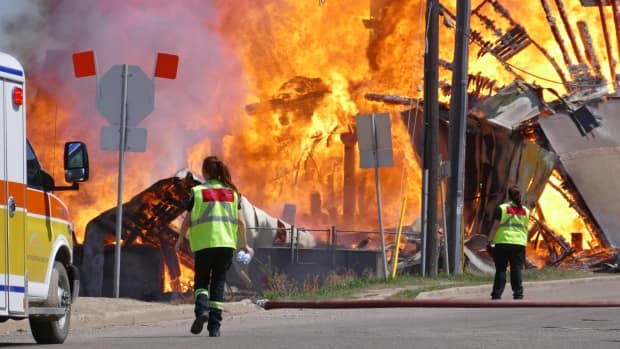 A massive fire that destroyed multiple buildings in downtown Brandon last month may have been caused by people, city police say.

Multiple witnesses reported seeing “a number of people” in a grassy area between a Canadian Pacific railway line and Christie’s Office Plus before that building went up in flames on May 19, Brandon police said in a news release on Monday. To date, evidence suggests the fire started in that area.

“These individuals have yet to be identified and it is unknown at this time if the fire was deliberately set or is accidental in nature,” police wrote in the release.

The fire spread to nearby buildings, including an apartment complex and a boxing club. Police now estimate the fire caused roughly $25 million in damage.

“To date, there is no evidence to indicate that operational activity on the rail line caused ignition.” 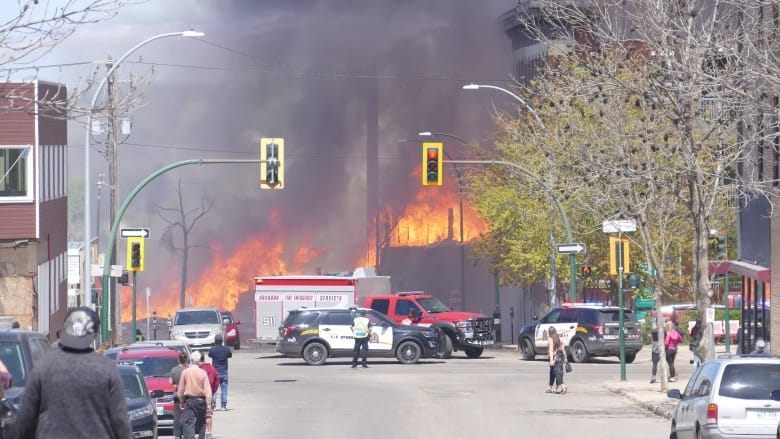 Anyone with information about the fires is asked to contact Brandon police. (Riley Laychuk/CBC)

Don Green, the longtime owner of Christie’s Office Plus, said the company — which he was in the process of selling before the fire — is just now getting most employees back to work at a temporary job site, about half the size of their former warehouse.

Green said a small number of retail employees have been laid off until the business can set up at a new retail site, which he hopes will happen in the fall.

Roughly 35 full-time employees work at the business in Brandon, he said, and the previous building was a complete loss.

It’s the second time in seven years the building has been damaged by a fire that started in the area behind it, he said. In 2011, people passing through that spot started a fire that forced the business out of the building for a few months due to smoke damage, he said.

The company will likely move its warehouse to an industrial park on the outskirts of Brandon next fall, he said.

Brandon police want people to continue to consider the areas where the fires burned to be a “safety hazard,” the release says.

Emergency workers from Manitoba Hydro, Souris, Wawanesa and CFB Shilo helped fight the fire and protect nearby buildings, police said, dispensing roughly 8.3 million gallons of water to do so.

The fire is being jointly investigated by the Brandon Police Service, the Office of the Fire Commissioner, Brandon Fire and Emergency Services and the Canadian Pacific Police Service.

Anyone with information about the fires is asked to contact Brandon police.