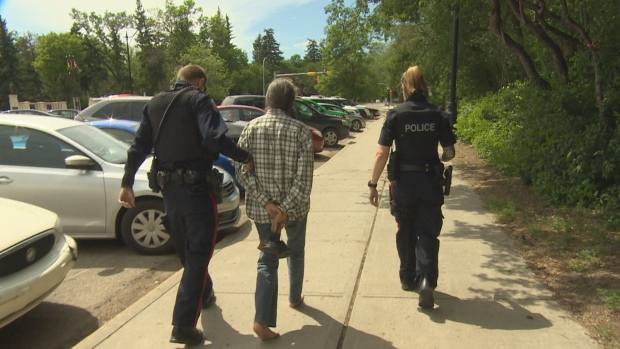 On Monday, police arrested activists and supporters from the teepee near the Sask. Legislature in Regina — all that was left of the Justice for Our Stolen Children camp.

The people were arrested for obstruction of justice, according to the Regina Police Service. No charges had been laid as of early Monday afternoon.

People at the camp cried when officials said they would dismantle the teepee once the fire inside burned out.
The province issued an eviction notice to the activists two weeks ago. On Friday, tents and other property that surrounded the teepee were dismantled.

Regina police taking woman from the Justice For Our Stolen Children camp into custody. Woman says she’s grandmother of Haven Dubois. <a href=”https://t.co/4NRla6bdLr”>pic.twitter.com/4NRla6bdLr</a>

Another person in custody. <a href=”https://t.co/vJkReucS9t”>pic.twitter.com/vJkReucS9t</a>

The camp was set up after Gerald Stanley and Raymond Cormier were acquitted in the Colten Boushie and Tina Fontaine murder trials.

Founders said the intention was to draw attention to Indigenous lives lost or affected due to factors like violence, foster care or addictions.