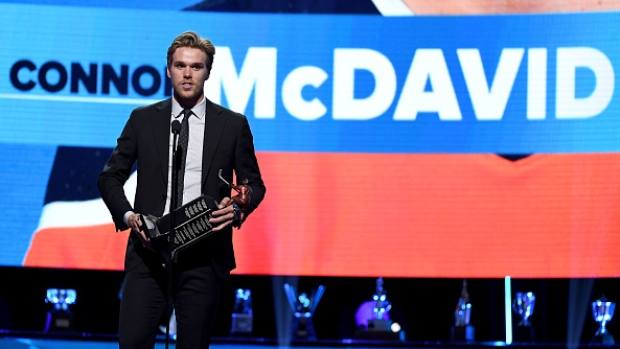 Connor McDavid has won the Ted Lindsay Award as the NHL’s most outstanding player as voted on by his fellow players.

The Edmonton Oilers captain beat out Colorado Avalanche centre Nathan MacKinnon and New Jersey Devils winger Taylor Hall for the honour to kick off the NHL Awards in Las Vegas.

MacKinnon, Hall and Los Angeles Kings centre Anze Kopitar were in the running later in program for the Hart Trophy — the league MVP award voted on by the Professional Hockey Writers’ Association.

McDavid got the nod for both the Hart and the Ted Lindsay last season.

He had 41 goals and 67 assists with a plus-20 rating in 82 games for Edmonton this season.

The Tampa Bay Lightning defenceman took home the honour as the NHL’s top blue liner for the 2017-18 regular season at Wednesday’s awards show.

Hedman scored 17 goals — a personal best — this season to finish in a three-way tie for first among the league’s defencemen.

The 27-year-old Swede added 46 assists for his second 60-plus point season after finishing third in Norris voting last year.

Hedman beat out Drew Doughty of the Los Angeles Kings and P.K. Subban of the Nashville Predators.

Subban, also 28, had a career-high 16 goals and was one point shy of his hitting 60 for the second time in his career. A finalist for the third time, he won the Norris in 2013.

Mathew Barzal has won the Calder Trophy as NHL rookie of the year.

Barzal, 21, became the seventh rookie in NHL history with at least 20 goals and 60 assists, and just the second to record three five-point games.

Boeser finished second among rookies in goals (29) and fifth in points (55) in just 62 games. The 21-year-old’s season was cut short in early March after he suffered a back injury.

Keller, 19, had 65 points (23 goals, 42 assists), second among NHL rookies and most by a first-year member of the Coyotes since the franchise relocated from Winnipeg to Arizona in 1996.

For the second time, Vancouver’s Henrik Sedin won the King Clancy Trophy. But this year, brother and teammate Daniel Sedin joined in the honours.

The Sedin twins shared the honour bestowed upon a player for leadership and humanitarian contributions to hockey.

They announced their retirement after the 2017-18 season following 17 seasons with the Canucks.