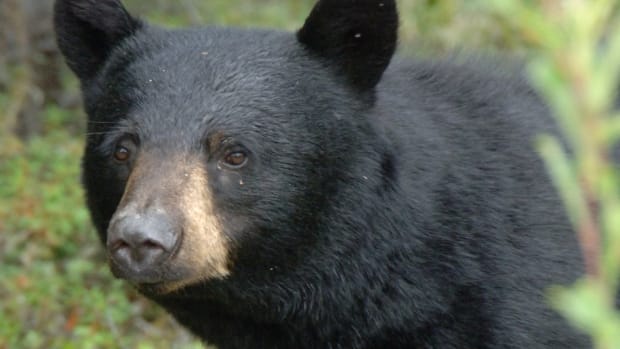 When a black bear lunged at his dog in Jasper National Park last month, the owner jumped on the wild animal to protect his pet.

The dog, which had jumped out of an open car window, was killed.

Steve Malcolm, a human-wildlife conflict specialist for the park, revealed the details of the attack in a Monday morning interview with CBC Radio’s Edmonton AM.

“He wasn’t expecting the dog to jump out and he ended up just jumping on the bear, trying to wrestle that dog free,” Malcolm said.

“It’s an instinctive reaction and one that we don’t condone.”

Malcolm said he has investigated two cases of people kicking at cougars to save their dogs, but this is the first time he’s heard of anyone trying to wrestle a bear in the park.

“Really, the fellow is really lucky that he was able to pull that off, but it didn’t change the outcome,” he said.

“And certainly our message is: Absolutely never do that.”

After jumping out of the car, the dog approached the bear while barking at it, Malcolm said. The bear responded as it would to any other predator.

The man likely escaped injury due to prey-fixation, Malcolm said. When a bear is attacking, it focuses solely on its potential meal.

“Their primary focus is to kill and disable that prey species and then they’ll go into a bit of a defensive mode to protect themselves,” Malcolm said.

“I think the fellow just caught him in that window where that black bear hadn’t completely killed that dog yet and the bear was basically going to focus on the dog first and then go back to its own defence.”

Malcolm said human-wildlife conflict specialists have been monitoring the bear since the attack but it has not acted aggressively toward humans.

The case is a reminder to keep pets leashed and to never attempt to rescue a pet under attack, Malcolm said.

Having an off-leash dog is not only illegal in the mountain national parks, but can increase the chances of an aggressive encounter with a bear, elk and other wildlife.

Some pet owners in Alberta have gone to great lengths to save their animals from wildlife attacks.

In April 2015, a man escaped with only a few bumps and bruises after fighting off a cougar that attacked his girlfriend’s dog on his acreage southwest of Calgary.

In the December 2016, a Red Deer man made international headlines for punching a cougar at a Tim Hortons parking lot after the wild cat grabbed his pet husky by the neck.

If a park visitor’s pet is attacked by a wild animal, they should not put themselves at risk by attempting to intervene.

“They don’t think,” he said. “They’ll go into a defensive action without thinking, because every one of them that has done it thinks, after the fact, ‘I can’t believe I just did that.’ “