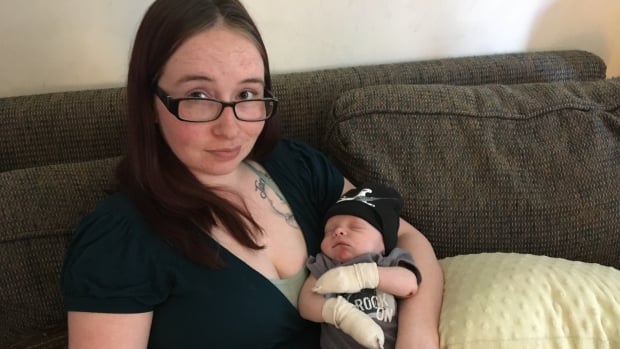 At a change station in their Calgary home that more closely resembles a medical cabinet, they carefully lance the blisters that cover his tiny body, clean the open wounds, and wrap every individual finger in clean bandages before putting on the protective mittens and socks that, hopefully, will allow his fragile skin to heal.

Two-week-old Elias has a rare skin condition called epidermolysis bullosa, which leaves the skin vulnerable to tears and blisters at the slightest touch. Babies affected with the genetic disorder are often called “butterfly babies” because their paper-thin skin is as delicate as the insect’s wings.

“It’s really hard right now, watching him be in pain all the time,” Taylor told CBC News on Sunday. And Taylor has first-hand knowledge of what his tiny son will endure in the months and years ahead. He also suffers from the rare condition.

“When I was born, it was a lot like him,” Taylor said. “There was no skin on my wrists, arms, ankles, up my legs a bit.”

It was a legacy Taylor was hoping he wouldn’t pass on to his son — the couple was optimistic after their daughter was born without the disease, that Elias would also escape his father’s fate. 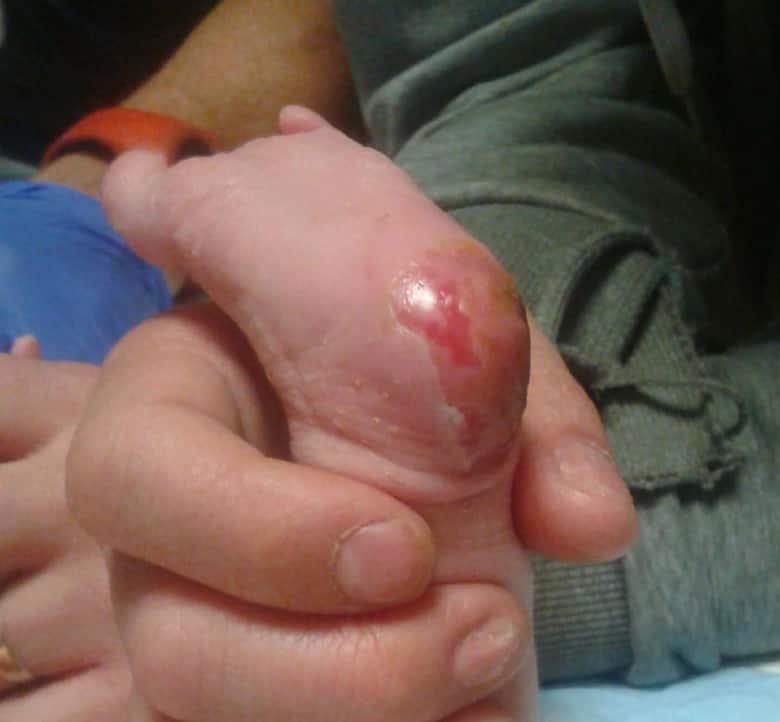 Babies with epidermolysis bullosa are often referred to as “butterfly babies” because their skin is as fragile as the insect’s wings. (Audrey Neveu/CBC)

But within days of his birth it became clear that Elias had the condition. Everything from the hospital ID bracelet to the clamp used for his umbilical cord caused painful blisters. Elias spent much of the first weeks of his life receiving treatment at Alberta Children’s Hospital.

One of the biggest challenges lying ahead for Elias is the lack of knowledge about the condition among both health-care workers and the general public, said Lamb. That’s why the couple is speaking out about his condition.

“I just want more people to know about it so schools will be teaching things about it, they will know how to deal with kids that are born with it, and more research will go into finding treatments,” Lamb said.

The parents also worry about the psychological toll the condition may place on Elias as he grows up noticeably different.

“Kids have no filter,” said Taylor, recalling how he was teased in school. “I’ll try my best to lead him down the right path with that and not pay too much attention to what other kids say.”

Fortunately, Taylor’s condition has improved with age, and he’s hopeful that will also be the case for his son.

For now, the parents are concentrated on keeping their little boy comfortable and healthy.

The family has started a GoFundMe page to raise money to cover expense for medical supplies like bandages, and special clothing designed not to aggravate Elias’s skin.

So far, they’ve been overwhelmed by the support they’ve received and they’re feeling confident the family is up to the challenge ahead.

“He’s our little boy,” said Lamb. “We love him regardless of what condition he has. It’s going to be hard for him growing up, he is going to have a lot of challenges, but I think we’re very well-equipped to deal with it.”