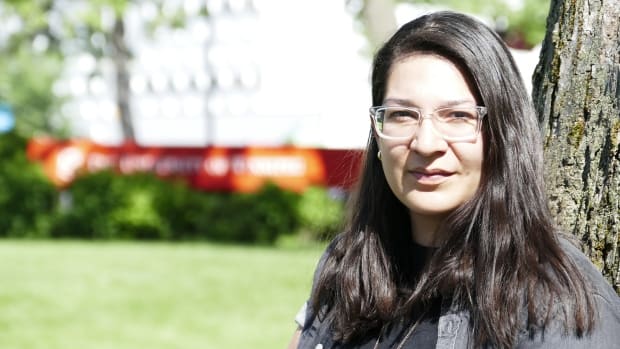 A Winnipeg sexual assault survivor says they feel retraumatized after their picture appeared without their permission on a banner at a federal government event celebrating female empowerment.

Sadie-Phoenix Lavoie, a young, two-spirit Indigenous Winnipegger, shared their story of surviving sexual assault for a Maclean’s magazine feature highlighting the stories of Indigenous women and their experiences with violence, which was published in December 2015.

The photo of Lavoie that accompanied the article was then featured on banners used recently by Status of Women Canada at a conference at the Wabano Centre for Aboriginal Health in Ottawa.

“I was very outraged by the fact that they completely ignored the need for consent from the photographer and from the person that they’re using photographs of,” Lavoie said in an interview on CBC Radio’s Up to Speed.

Maclean’s told CBC News it did not consent to the use of the photo and sent the federal government a cease-and-desist letter.

Lavoie also sent a letter, detailing the emotional impact the use of the photo had, and expressing hope that the department learns from the mistake.

“I will hold you and your government accountable for retraumatizing me by using my survival story against sexual assault and ultimately colonizing my face, tokenizing me, and inflicting violence,” Lavoie wrote in the letter to Status of Women Minister Maryam Monsef.

In response, deputy minister Gina Wilson wrote a letter in which she apologized and said the department had taken steps to remove the photo from all promotional material.

She added that the department would “use this experience to re-evaluate our practices to make sure we do not make this mistake again.”

Still, Lavoie says the experience raised some serious questions, including how the photo ended up being used in the first place.

“Did they ask permission and consent from the other women that are also on the banner?” Lavoie said.

Lavoie, an activist and co-founder of Red Rising magazine who has been vocally critical of the federal government, says it is “ironic” that they would use the photo, accusing the government of “red-washing” their policies.

“It’s the fact that they’re taking something and stealing something, and using [it] for their benefit. They’re colonizing my body, my face, for them, and completely ignoring how I feel about it or my rights about that,” Lavoie said.

The photographer told Lavoie he didn’t intend to pursue the issue beyond the cease-and-desist order. Lavoie hasn’t decided whether or not to pursue and further legal action.

“I didn’t go out here with the intention of ‘I’m just going to get money from the government’ or something like that,” Lavoie said.

“I want them to feel those things and not be, like, ‘Oh, we’ll just throw money at you.'”