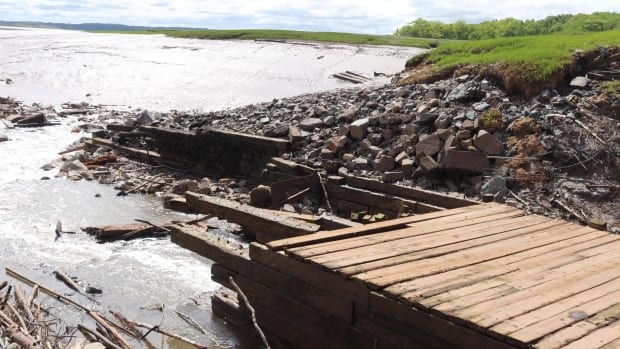 People in Hantsport, N.S., are worried they’re about to lose critical infrastructure due to a failed aboiteau, or dike, over a river in the community. But the question of who should repair it is at the centre of a legal dispute that won’t get resolved any time soon.

“I’m seeing a disaster. This is nothing short of a disaster for the people of Hantsport,” West Hants Coun. Rob Zwicker said of the current state of the aboiteau.

Until the fall of 2017, the aboiteau was an embankment of earth and a wooden sluice — a sliding gate that controls the flow of water — that had stood for more than 100 years across the mouth of the Halfway River, in the middle of the community of Hantsport. 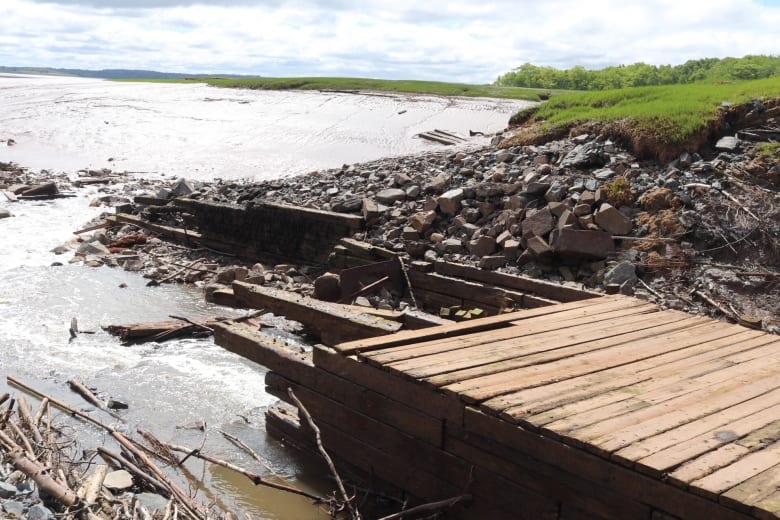 The remaining wooden structure of the Hantsport aboiteau is not restricting the movement of tidal water. (Steve Berry/CBC)

When it was whole, the aboiteau had a gate that was supposed to block tidewater from the Bay of Fundy from running upriver, while allowing freshwater from the river to exit into the bay. After the aboiteau fell into disrepair around 2009, the gate broke off. The earth embankment continued to erode and was completely washed away by late 2017.

Zwicker said he fears for the bridge over Highway 1, the main route into town. That bridge is only a few hundred metres upstream from the broken aboiteau and its supports are being surrounded by silt and are washed daily by tidal water.

If the Highway 1 bridge floods or washes out, that would cut the town’s “lifeblood,” Zwicker said.

“It’s important for fire maintenance. If we lose that bridge, we’ll have to come up with an action plan to support our neighbours in Mount Denson and Falmouth. It’s a main thoroughfare for traffic and tourism,” he said. 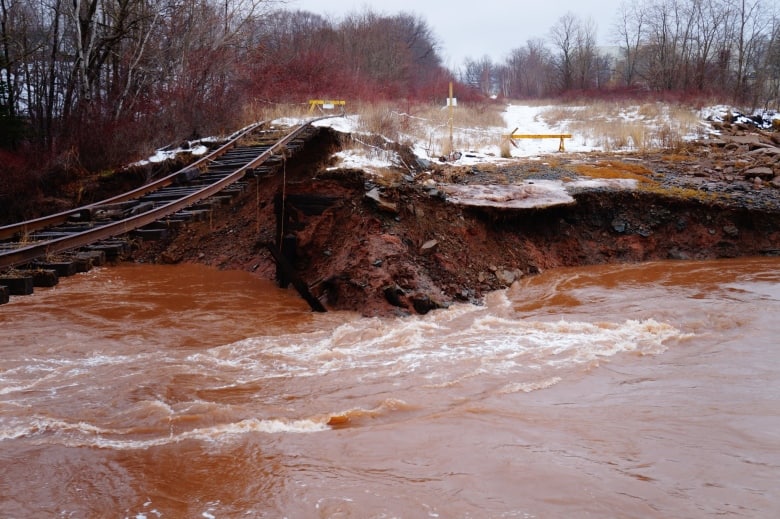 The earth of the Hantsport aboiteau was washed away by late 2017 or early 2018. The railway tracks overhanging the gorge have since been removed. (Jane Davis)

Zwicker said he also has concerns for the bridge over Highway 101, which crosses the same river roughly two kilometres further upstream.

“I think if we have a snow-filled winter and don’t do action on this, this year, we’ll see problems come spring next year.”

The Windsor and Hantsport Railway

The top of the aboiteau was once crossed by the Windsor and Hantsport Railway, which is owned by Bob Schmidt, an American businessman who lives in Alexandria, Va.

The provincial Department of Transportation and Infrastructure Renewal gave Schmidt’s company an emergency order to repair the aboiteau by July. Schmidt said he is getting engineering and permitting work done and will comply, although in an interview in mid-June he could not put an exact timeline on the work.

However, Schmidt disagreed that the aboiteau is his responsibility, and is fighting the province’s order in court. 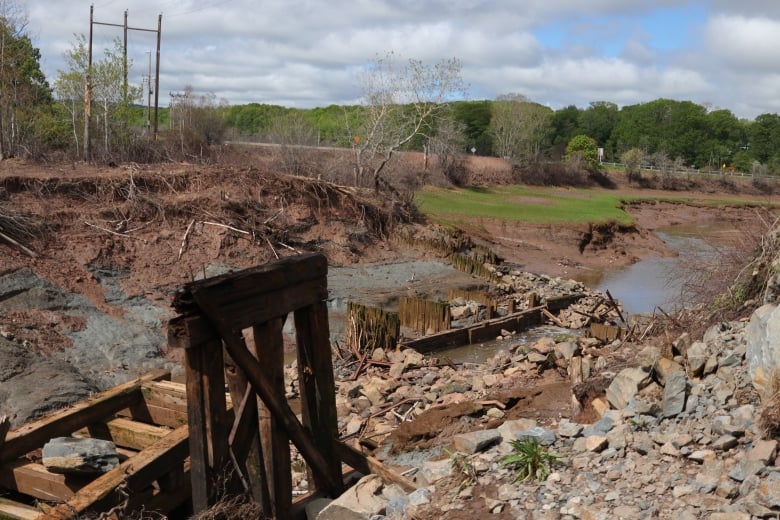 The aboiteau was once crossed by the Windsor and Hantsport Railway. (Steve Berry/CBC)

Schmidt agreed that Windsor and Hantsport own the two pieces of land abutting the aboiteau, but disagreed that his company owned the 25 metres of earth which crossed the river and is now washed away.

“We don’t own that causeway, but we travel over it. We have a right of way,” he said.

“I don’t know that the railway is supposed to be the water barrier for all towns along any coastal areas within the province. Not being disrespectful, but I don’t think we’re supposed to be a dike or an aboiteau system from that perspective.”

Schmidt’s company has applied for a judicial review of the Transportation Department’s order, and that case will be heard in December.

Many Hantsport residents say they have no confidence that the Windsor and Hantsport Railway will comply with the order to fix the aboiteau.

Meanwhile, December seems a very long way off for residents like Jane Davis. She sits on the board of the Hantsport Memorial Community Centre, a seven-hectare property with several buildings, a ball field, a playground, and a pool. The community centre is immediately beside the Highway 1 bridge. 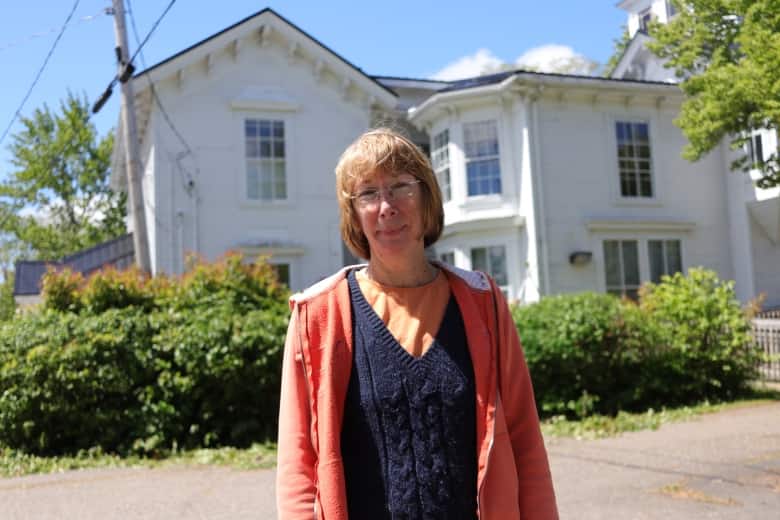 Jane Davis lives in Hantsport and is a board member of the Hantsport Memorial Community Centre. (Steve Berry/CBC)

Community centre users used to have access to a riverbank walking path, but Davis said the board recently decided to discourage people from using the path because of erosion on the bank. They were afraid someone would fall in, or a tree would fall on them.

“We’ve got a playing field here that will eventually just slide into the river,” Davis said. 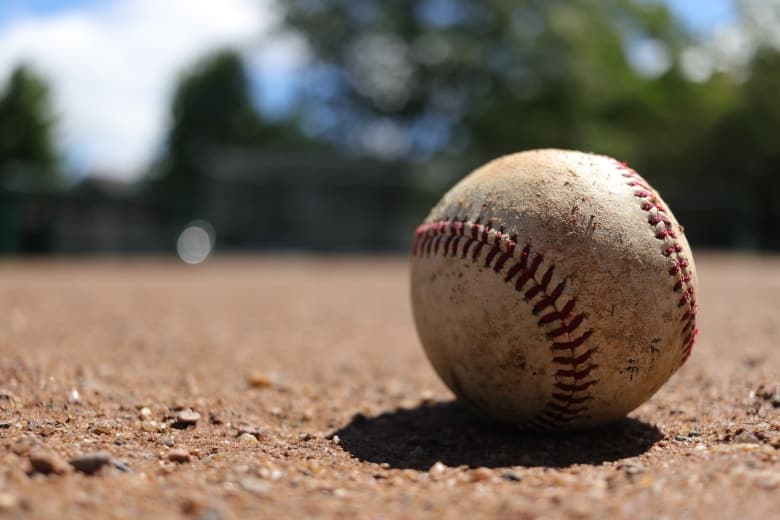 People in Hantsport say they are concerned for infrastructure that includes the ball field, cemetery, and bridges into town. (Steve Berry/CBC)

She believes the province should step in to repair the aboiteau, then try to recoup the cost from the Windsor and Hantsport Railway.

“You’ve got the riverbank cemetery that’s got graves right on the edge of the bank, those will all slide into the river. We don’t want to see that happen. The province needs to do something now.” 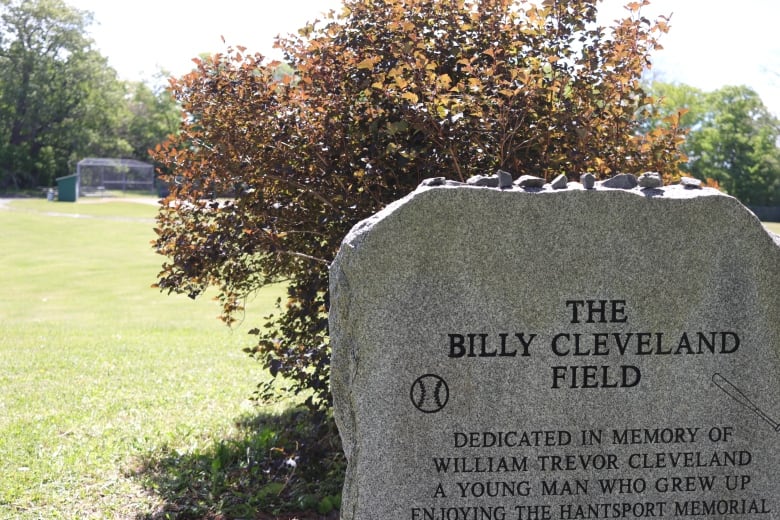 The ball field in Hantsport overlooks a drop-off that leads to the river. Community members are concerned erosion could start to affect the field. (Steve Berry/CBC)

The province said for now, that is not in the plans.

“If we see any specific or precipitous process or development that would cause difficulty, we’d have to move to another stage,” Transportation Minister Lloyd Hines said last week. “Currently we don’t see there’s any precipitous considerations there at the present time.”