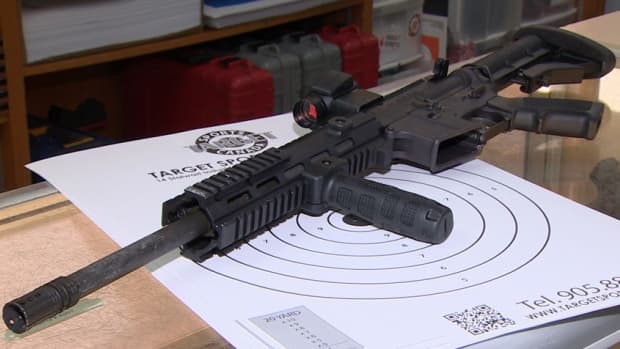 A report going to the Hamilton Police Services Board Thursday suggests more than two dozen of the “accurate, rugged and reliable” rifles be added to the service’s arsenal at a cost of $95,562.23.

Chief Eric Girt cited a business case from police command that called for the guns in response to “an increase of incidents with active shooters in Canada [and] the need for equipment that can meet the increased threat level was necessary.”

Fifteen of the high-powered rifles are already being used by members of the service’s Emergency Response Unit, but the service says Hamilton police are the only major force in Ontario that does not offer patrol officers a carbine rifle. 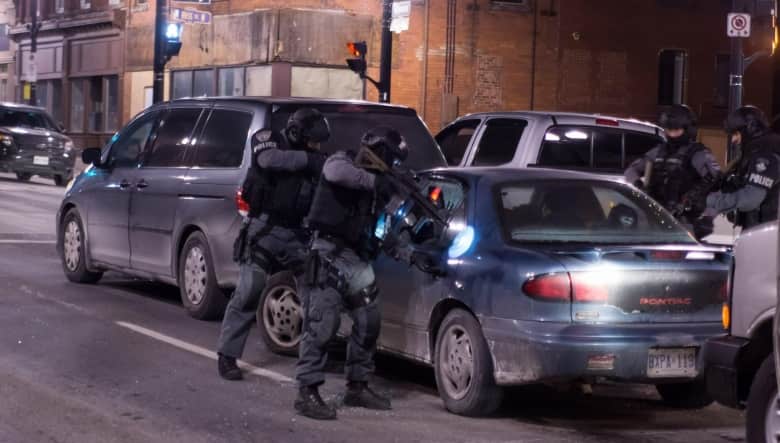 This photo from Hamilton photographer David Fillion shows members of the Hamilton Police Emergency Response Unit armed with assault rifles surrounding a car at Hess and King in 2016. (Dave Fillion )

That’s despite the fact that “active shooter incidents are becoming more frequent,” and that the need for officers to be able to “effectively address the threat of a well armed individual” has been recognized by the courts, according to the recommendation.

The service also refers to research that “proves that carbine ammunition is a superior choice to pistol and shotgun ammunition” because it can be fired more accurately over long distances and be used to stop criminals wearing body armour.

The rifle is made by Colt Canada in Kitchener, Ont. and weighs about three kilograms unloaded. It’s capable of firing rounds with a muzzle velocity of 868 metres per second and is accurate up to 400 metres.

The service notes the C8 carbine is used by police across the province and by the Canadian military.

A spokesman for Colt Canada, previously told CBC News the rifle is a “fully- or semi-automatic assault weapon,” but that “98 per cent” of their law enforcement customers buy the semi-automatic version.

The projected price tag for the first year of the program covers the cost of the carbines, along with with related equipment and training for 48 officers over the course of four weeks.

That training would be provided to 16 officers from each division selected by unit commanders based on criteria including previous military or tactical unit experience, Use of Force qualifications and if they have “demonstrated above average competency and confidence in weapons handling and judgment.”

Following the training, the service plans to take 12 months to evaluate the program and determine where in the city the rifles should be assigned.

“The goal of this program is to ensure that our uniform frontline members are equipped with the appropriate technology and training to continue to address public and officer safety in resolving critical and high risk incidents,” reads the recommendation.