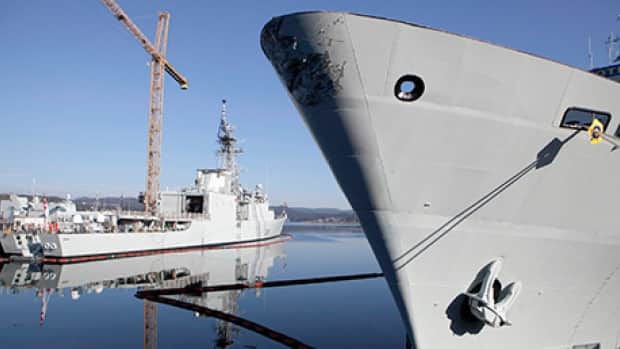 The complainant in a sex assault case against a Halifax-based military policeman says she woke up confused in her hotel bed and felt the sensation of “skin to skin” as a man’s body pressed against her.

The military officer, whose identity is protected by a court-ordered publication ban, said she repeatedly said no, but was ignored during an incident alleged to have taken place during a Canadian Navy exercise in Glasgow, Scotland, during the early morning hours of Sept. 27, 2015.

Sgt. Kevin MacIntyre, 48, entered a not guilty plea Monday to a charge of sexual assault at the beginning of a court martial proceeding in Halifax.

MacIntyre, a member of the military since 2002, is being tried before a military judge and a five-man military panel composed of three officers and two non-commissioned officers.

“This is a case about a sexual assault and about someone who was simply not willing to take no for an answer,” military prosecutor Navy Lt. Jennifer Besner told the panel.

“The nature of sexual assault, the people that commit this offence, and the people that are victims of it may not always be what we expect,” said Besner. “The way a victim may react during an assault or afterwards may also challenge our assumptions.”

‘Ignoring her refusals and her attempts to resist’

Besner said the alleged assault against the complainant occurred after a long day of travel, a day of work, and an evening of socializing and drinking with other members of the Canadian Forces.

“While she slept the accused entered her room, got into her bed and proceeded to sexually assault her, ignoring her refusals and her attempts to resist,” Besner said.

She said the complainant “barely knew” the accused, having met him just shortly before the deployment.

Sgt. Kevin MacIntyre stationed at CFB Halifax has been charged with sexual assault involving another member of the Canadian Armed Forces. (Brian MacKay/CBC)

Under questioning by military prosecutor Maj. Larry Langlois, the complainant said she returned to her hotel room in an exhausted state following the night out. She said she hadn’t slept for about 36 hours after travelling from Canada and going straight to work in Glasgow on Sept. 26.

She said she was helped back to her room by another female officer although she wasn’t impaired, and was inside the room when she turned around and saw MacIntyre standing by the doorway.

The complainant said MacIntyre and the other woman left soon after she stripped down to her white top and underwear and crawled in bed. She said they returned shortly after she had woken up in a panic minutes later, wondering where she had left her passport, and she let them in.

Once she found the passport, she said the female officer and MacIntyre sat on her bed and chatted a while before leaving her alone once more.

‘I don’t know how he got there naked’

The complainant said she fell asleep again, but was startled awake by a man in her bed. She said he was pressed against her from behind in a “spooning position” and although she couldn’t see him she knew it was MacIntyre because she recognized his voice.

“It was him trying to touch my vagina with his hand, that’s what woke me up,” she said. “I don’t know how he got there naked.”

She said she didn’t scream or yell but she told him “No,” as she was forced to continually remove his hand from her lower extremities “10 to 15 times.”

“It happened to me and I think I just froze. I could have just yelled, there was a room beside me, but I didn’t even think about it.”

The complainant said she eventually passed out after rolling from her side to her stomach but was soon awake again to a voice asking her “Do you like it?”

She told the court she was penetrated during sex that lasted 15 to 20 minutes.

The complainant said she eventually fell asleep again and MacIntyre was still in her bed when she woke up around 6:30 a.m. She said she asked him to leave and he did while she waited in the bathroom.

The complainant said she discussed some details about the incident with her superior and others on the deployment, but didn’t want to make a formal complaint because she is married and she didn’t want her husband to find out before she could tell him what happened.

The formal complaint was finally made about six months later on March 21, 2016, she said, after she suffered a panic attack while on a deployment in Jamaica.

The complainant is scheduled to be cross-examined by the defence when the hearing resumes Tuesday.