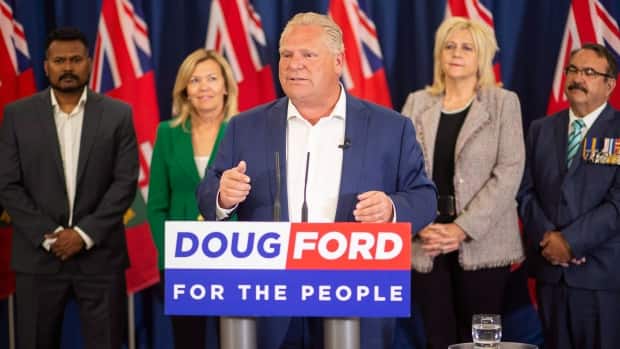 As premier-designate Doug Ford forges ahead with his plans even before formally taking power, his victorious Progressive Conservative candidates arrive at Queen’s Park Tuesday for their first caucus meeting since the election.

The 76-strong PC caucus is the largest of any Ontario party since the Mike Harris PCs won their landslide back in 1995. They will gather Tuesday morning for a speech from Ford in front of the cameras, then hold their closed-door meeting in the largest committee room at the Legislature.

The incoming premier has already slapped a hiring freeze on the provincial public service and given notice that he will withdraw Ontario from its cap and trade program for reducing carbon emissions.

Ford and his yet-to-be-named cabinet are scheduled to be sworn in on June 29. The Legislature could then be convened for a quick summer sitting to fulfil Ford’s promise of cutting 5.7 cents a litre off the provincial gas tax and to begin repealing Ontario’s cap and trade legislation.

The caucus meeting will be particularly sweet for such PC veterans as Lisa MacLeod, who has spent her entire 12-year career as an MPP in opposition. 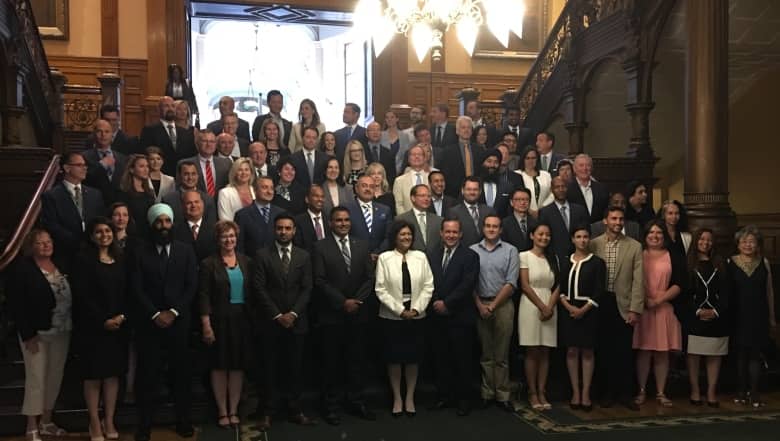 Most of the 73 newly-elected MPPs, from the Progressive Conservative, New Democratic and Green parties, posed for a group photo on the grand staircase at Queen’s Park on Monday. They were attending orientation sessions organized by legislative staff. (Mike Crawley/CBC)

“It’s going to be a big new day for me and it’s a very exciting one,” said MacLeod in an interview Monday at Queen’s Park. “It’s going to be great to see so many of the great candidates that we have across Ontario join us in the government caucus under Doug Ford’s leadership.”

MacLeod said the meeting will be an important opportunity for the PCs to celebrate together, to hear from Ford, and to establish an esprit de corps. “I think the agenda setting will be done in the weeks and months ahead,” she said.

Christine Elliott, newly elected in Newmarket-Aurora, will be returning to the PC caucus after a three-year absence. “Nine long years in opposition and now it still seems surreal to be on the government side, but it’s a great honour and of course a big responsibility too,” she said in an interview Monday at the Legislature.

Elliott resigned as MPP for Whitby-Oshawa in 2015 after losing the PC leadership race to Patrick Brown, but came out of political retirement in February to vie again for the party leadership, losing narrowly to Ford.

“It’s a whole new ball game on the other side [of the House] that we’ll have to learn, and a steep learning curve for all of us, but I think we`re all quite happy to be on that other side,” said Bill Walker, re-elected in Bruce-Grey-Owen Sound.

Joining the PC veterans will be 48 first-time MPPs, including Ford himself.

“This is such an incredible opportunity,” said Donna Skelly, the MPP-elect for the Hamilton-area riding of Flamborough-Glanbrook. “We have a very big majority and of course we’re anxious to get together and we’re anxious to speak to our new leader.”

“It’s exciting to be back in this building,” said Christine Hogarth, who was a political staffer for the Mike Harris and Ernie Eves governments. She will be the new MPP for Etobicoke-Lakeshore. “It is such a privilege to have this job.”